Tom Kelly caught some nice ones on his whacky worm in Float creek. 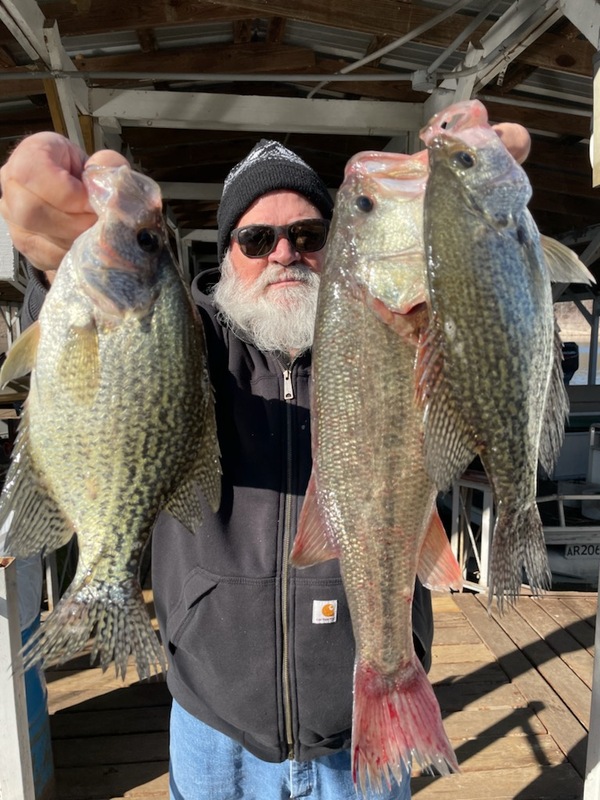 The lake level is 554.40 and has dropped about 3/4 of an inch in the last 24-hours with both generators running about 1/2 the time. The surface water temperature was between 55 and 56 depending on where you were yesterday afternoon and the ambient temperature was 60 degrees. It was a little breezy but no white caps. It is to be sunny and warm with temperatures in the 70's for a few days with very gusty winds and then another cold front is coming through. The people that love high winds should be really happy, but me not so much. I did see one other boat out there in Blackburns area and he was fishing open water between Hensley's creek and Mallard point docks. I do not know if he caught anything or not but he was in the same place for quite a while and then left. I was fishing a couple of brush piles further up river. The fish were slow but steady for about an hour and then the big crappie started to bite about 4:PM.  I had been catching bass, big bluegill and crappie in the 11-inch range until then when I switched to the white grub and minnow. I was casting it past the brush and letting it sink into it and they were hitting it on the drop about 15-ft. down in 30-ft. of water. Big ones too, maybe the largest of the year. I do not know if they were always there or a school just moved in. I kept my self imposed limit of five for a friend that cannot fish anymore for a Christmas present. 10 fillets almost filled a 1-gallon zip lock. I needed some as I do not have any inventory and Christmas is almost here. The other fish were released under the dock and the school there is getting big. Children were fishing off the dock, feeding the fish and having a good time. It is busy here at Blackburns and will get busier next week. Several places are shut down and people are trying us out because we are open all year and do not leave for vacation. We hope they like it here.