Norfork Lake Arkansas near Mountain Home in the Ozarks Mountains Region by Scuba Steve from Blackburns Resort and Boat Rental.

One of my favorite people, Rum Binkley with a fist full of Christmas Crappie caught on the Bink's Spoon. 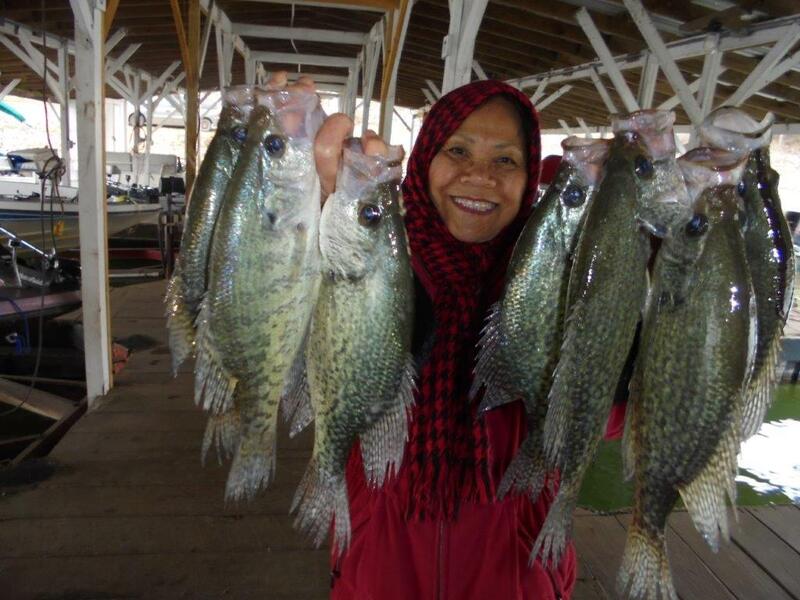 The lake level is 554.49 and has dropped 1-1/2 inches in the last 24-hours with both generators running about 2/3rds the time. The White River at Newport is 14.89 and dropping. The last big rain has moved on down the line. December is now almost gone and the lake needs to keep dropping before we get into the spring. It is at a good level now but we are too close to that 560 mark when problems start to occur. I like to be at 547-48 on May 1st and then hold in the 550's for the whole year. The lake surface temperature was 53 when I went out yesterday and the water is stained a bit but a good color for fishing. The rain did not affect the fishing and it is even better now especially for bass and crappie. They are starting to catch and kill the small stripers again and I guess they are trying to eradicate them. The striper fishermen are cutting their own throats but old habits are hard to break. They should all be released this time of year and again in the spring top-water until the big ones come back and quit fishing for them deep but nobody seems to care. I do even though I do not fish for them much. We will turn into another Lake Texoma and our stripers do not even reproduce in Norfork. The crappie and bass do though and they are biting. I have never caught so many big bluegill and they are very tasty and it has been a banner year for catfish. More and more walleye are being caught and the size is increasing. The Kentucky Bass population is very high and they are a staple when the other fish are hard to catch and are also excellent eating. The Game and Fish conducted a Norfork lake Angler Creel survey as to what fish people were targeting. They interviewed over 1,000 fishermen at the boat ramps and found that 63% were after Black Bass (large and smallmouth), Crappie were #2 with 12.5% followed by anything at 9.2% and Striped Bass at 9%. This survey was for 2020 and 2021. I guess this is the reason that there is a push for changes in the bass fishing regulations and many more people are after black bass than anything else. They are scientific and at the same time of the creel survey they were sampling fish populations of the lake and are trying to make everything balance. Norfork lake is very old and does not reproduce like a newer lake and needs to be managed. Our Biologists care about the lake and know what is best for it and try hard to make it happen. We are fortunate to have them. I am not a fan of big government to say the least but this is an exception. Without them the meat hunters would fish the lake out. With most of the big stripers gone I am not seeing nearly as many small bass as I was a few years ago but am seeing more in open water on shad than before. Everything in Norfork is getting all the food they want and all of the fish that I am catching are very fat. I have seen the shad population higher but at the same time am seeing many schools of them with no game fish on them. Some species of fish's population is controlled by daily limits more than others. For an example it is hard to get anybody to release a keeper walleye so the limit is important. On the other hand many bass fishermen release their fish and the limit does not affect the population as much. I think 15 is too high for crappie limit but also understand the tendency to keep Missouri and Arkansas rules the same. Very few people like to see huge stringers or dock floors full of dead fish anymore no matter what the limit is. That is something to be ashamed of not brag about.  Arkansas changed the law for possession limits from twice the daily limits to three times the daily limits this year. I am not sure I agree with that but they are not out there checking most people's freezers anyway. In general I believe the area lakes are managed very well and do not want Norfork to have the same problems as the Tennessee River lakes, especially Kentucky Lake which has been managed terribly. Many fishermen that used to go there are now coming to Norfork. The fishing pressure has increased dramatically in the last few years and it is not the same as it was but is still the best around when you take in account everything. I just want to keep it this way. As long as I can go down to the dock and use my trolling motor to get to a Blackburns Resort brush pile and catch a few fish I will be fine but it is not as easy as it used to be. Once a person finds one and catches a fish they camp on it for the rest of their lives.  They should put in their own. It is to get very warm and windy for a few days so we will see what happens. I will be out there. Blackburns is open all year and is not on vacation. Why would I want to go any place else?