Scuba Steve with a couple of yesterday's catch. Released under the dock. 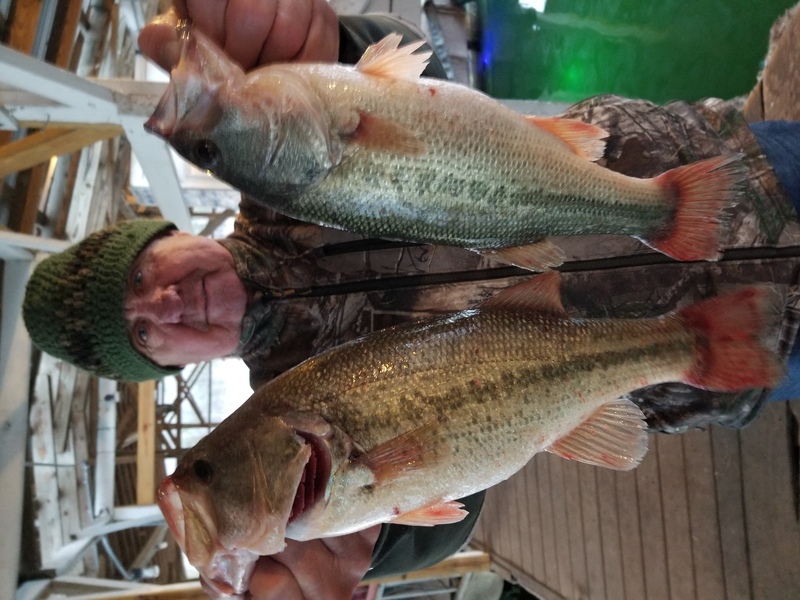 The lake level is 554.63 and is the same as it was at this time yesterday. They quit generating about 9:PM last night and just started back. It started to rise a little when they quit but not bad indicating that the slug is moving through the system. The White River at Newport is at 16-ft so they are doing what they can to hold the levels but are still running Bull Shoals hard even though it is below power pool and Norfork is above. There has been little effects of the big rain, except for the three foot rise in water level, in Blackburn's area so far and anything has had ample time to get here if it was going to. The low point was 551.34 before the rain on December 17th. It's high was 554.83 and has actually dropped just a little since then with the heavy generation. As far as my and several other people's fishing out of Blackburns is concerned the fishing has not changed much with some nice Kentucky Bass, crappie and bluegill being caught everyday and mostly on the spoon. The water is a little more stained but not a lot. The surface water temperature is dropping very slowly and is 554 this morning and it was very frosty. The ambient temperature has not warmed up as quickly as originally predicted but they are still saying 70 by friday but the sun is shining and the wind speed is low. I talked to one troller and he said he had not caught a fish in three days. When people do not write a report it is usually bacause they are not catching much not because they are not fishing. I just try and report what is happening for my customers so they do not get a surprise when they get here. Some others are getting a surprise when they find out the new price increases almost everywhere except Blackburns. They had better watch unless they just have too much money. I instructed a purchasing agent at one of the places where I managed to put up a sign on his wall that said " first one up-first one out" and it really made the sales people that came to see him think before raising prices. We will hold out for as long as possible before anything is raised here at Blackburns and there will be none for 2022 but it has not stopped the improvements. I took several boat seats out to ITS in Midway for reupholstery and a boat for a new top. Those people really do a good job and at a fair price. The new counter tops and cabinets are placed in cabins 5-8 and are ready for installation along with a new vanity in cabin #4. Hopefully this will happen next week. You will like what you see when you get here and there will be new brush piles. I wish we had more help from others doing this.