Scuba Steve with a couple of yesterday's catch. It was cool out but not bad. 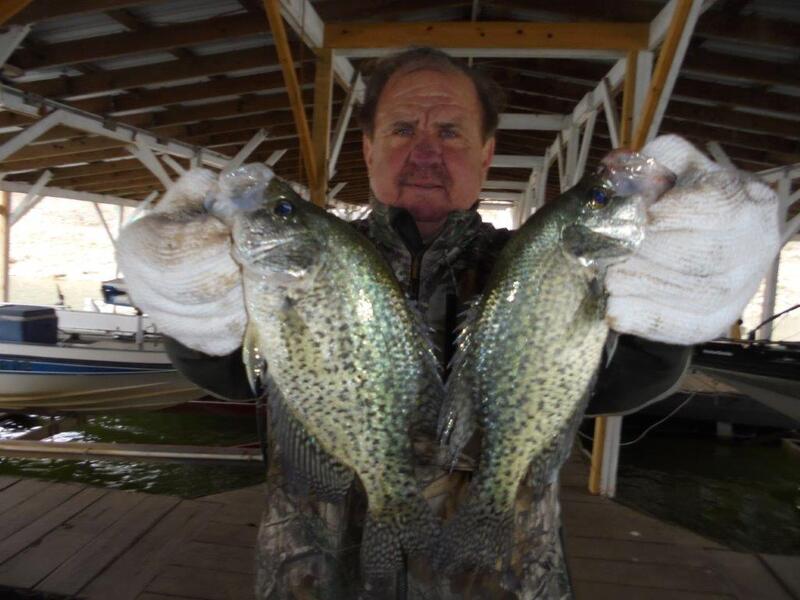 The lake level is 554.80 and has risen 2.2 feet in 24-hours and they finally started generation last evening for about 1/2 the time. We received about 6-inches total of rainfall total for the last three days. A high pressure system is here now with sunshine for the next week and temperatures are to reach 60 by friday. It was cold last night but temperatures are creeping up. There is a slug of brown water heading here from Missouri and should be in this area soon. It looks like the lake will keep rising with the heavy rain and flash floods in southern Missouri in the Norfork River water basin unless they generate more. They have had two months of very dry weather to drop the lakes and refused to do so and now we are one big rain away from being too high again. Anything over 560 is too high and starts to cause problems. If they cannot manage it in December fat chance of doing it in the spring. If we had been at 547 when this last one came we would be at a little over 550 and no problem. Now we are back out of the power pool and the decisions are up to the Corps of Engineers rather than the power administration. It does not matter much as both are government. At least it is not like April of 2017 which was devestating even after they dropped the lake to near 546 in the winter like they should have.  We have a much better chance if we start out lower. Going into the spring in the mid 550's does not give us much of a chance. The backs of the creeks are actually starting to clear up already and the brown coming this way will clear as it moves south with the generation current. There is no secret that I do not like to fish brown water. You can catch some fish in it but it is like the wind, I prefer to get out of it. The people that love high wind would probably really like Kentucky last week. The surface water temperature was 56.5 last evening when I went out and the crappie were biting. I caught my self-imposed limit of five from 4:PM until dark with one short walleye and a couple of Kentucky Bass. I saw no other boats and the water clarity on the main lake where I was fishing was pretty good and you could see your lure down 4-5 feet. The spoon is still the best lure for me and I did not get a report from any live bait fishermen or other trollers. We will see what today brings. Thanks to the crew at Vision Amp who worked on my web site and blog  providers all weekend and got me back up. Several high traffic web sites got hacked and they rose to the occasion. The moon is big and the creeks are rising. Tuesday is the shortest day of the year and after that we are headed in the right direction. Have to go down and move the dock.