Jim Bornhop with a few of yesterday's catch. I told him to go home and give brother John a lesson. He will be here soon. 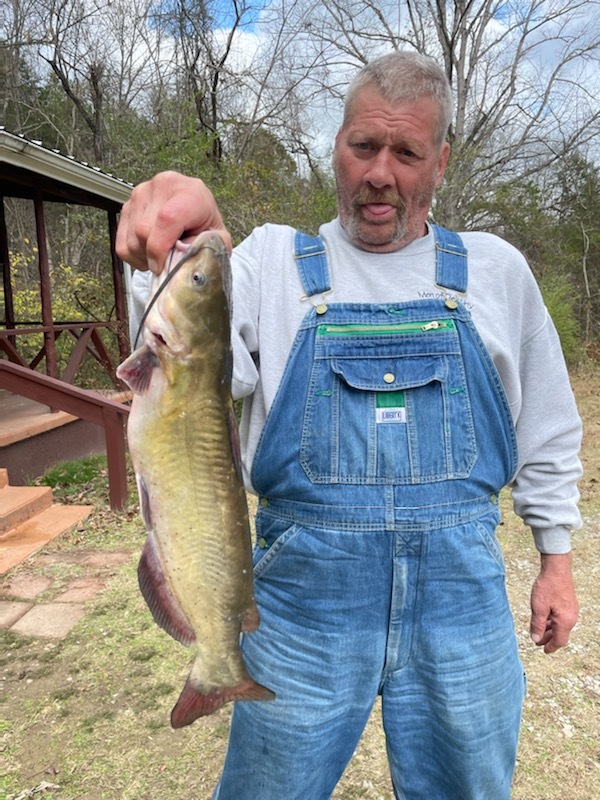 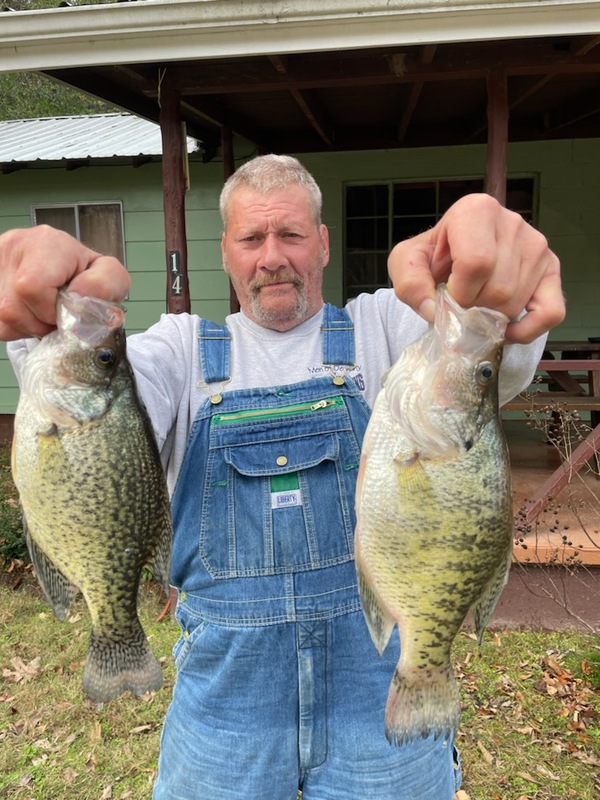 The lake level is 551.57 and has dropped 2-inches in the last 24-hours with about 5-hours of running both generators. The White River at Newport is about 4+ feet. The fishing is changing even though the water temperature has not. It is hanging in there at 57-degrees. People that love the wind should be happy about yesterday but I did not see many of them out there. It was still windy at 4:PM when it usually quits if it is going to do so. Jim is back and is catching crappie and catfish. He reported finding fish much shallower yestersay and so did I. The crappie were in 15-ft. of water in front of brushpiles with some nice bluegill and were biting pretty good. He switched to a slip float and minnow in the shallow water as it was nearly too shallow for a good spoon presentation. Crappie typically do this when the water cools in the late evening in December as do Kentucky Bass. The two seem to like the same thing. Bink reports catching open water temperate bass of all species on his spoon 40-ft. down no matter how deep the water. Mostly they were in 40-50 ft. of water but most all were in the 40-ft. range. He found a large school of white bass about 8-9 inches long and that is a good sign they are coming back. He also caught a few good ones. Several good sized hybrids are showing up also along with stripers from 5-9 pounds. This is a good time to catch Stripers as they will move to near the bridges when it gets cold and go next to the river channel and get hard to catch. They will be in about 50-60 ft. of water and just stay there. People predict striper fishing will get better as the water gets cold but I do not agree. Tom Kelly reports catching some Smallmouth bass back in Float creek in about 16-ft. of water on his whacky worm. I have not caught any yet but am ready. He also caught a few largemouth bass. They will move to their winter banks soon. Dave is catching some nice crappie but not a lot. He is using both the spoon and minnows on a slip float and is mostly fishing Blackburns Brush piles. It rained a little so far this morning and it is to continue for a couple more days and then another cold front is coming and dropping the temperatures drastically again. We could get 2-3 inches but I suspect we will not get that much. We are on the north part of the front but will get some for sure and it will not hurt anything unless it comes too fast. Several of us will be out there and let you know what is happening. That is what we do. I have not caught a walleye in a week now but am not targeting them but that is not an excuse. I would like to catch a couple everyday. Right now crappie, catfish, bluegill and Kentucky Bass are the best bite for me and Bink is fishing open water on flats for all temperate bass. He is using the 1/2 ounce white spoon and I am using the 1/4 ounce white with red eye most of the time and switching to the Bobby Garland baby shad when it is windy. I bought some 1/16th ounce white jig heads with a red eye yesterday with a sickle hook. I usually do not like them but Mike at Nabatak said they were good so I am trying them. They are a little bigger than the #4 which is my favorite size but Mike almost always knows what is best. We disagree on goldfish for catfish bait as I never catch anything on them but others do. I guess. It might be said that I catch a few catfish.