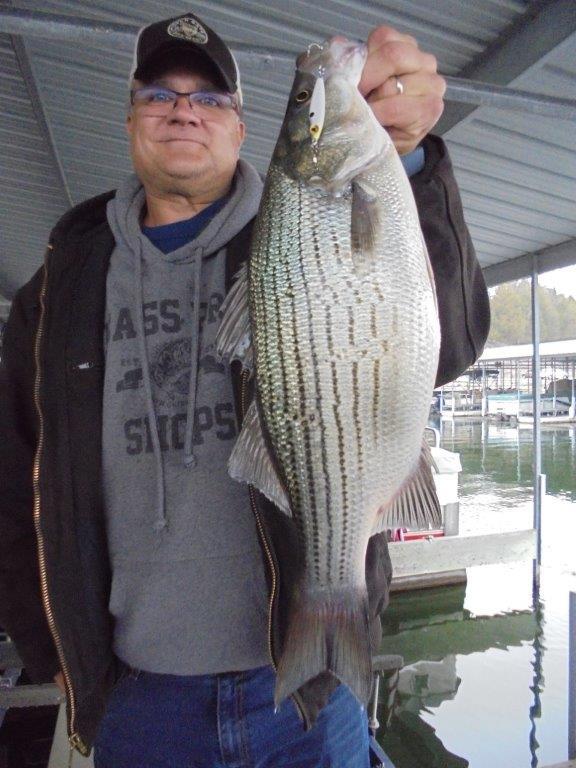 The lake level is 551.68 and has dropped 1-1/3 inch in the last 24-hours with a few hours of running both generators. The surface water temperature was 57 degrees and has stayed almost the same for several weeks. We received about 1/4 of an inch of rain yesterday but the conditions were good when I went out in the afternoon. It was cloudy with an ambient temperature in the early 60's with a light southeasterly wind. I went over to one of Blackburns brush piles on a river channel bank where the water dropped off quickly. I had placed the brush right on the dropoff where it was 25-ft. on the shallow side and 35-ft. on the seep side. It is in a perfect position and the fish were right on it. I fished it for about an hour and caught four nice Kentucky Bass, two 12-inch crappie and a couple of big bluegill. I would have to say that the fishing had went from just fair to good in just one day at least for these kinds of fish but that is all that I am fishing for except for walleye this time of year. I am leaving the temperate bass alone until they make a comeback. There are many other good fish out there and better to eat also and you do not have to cut out the red meat. Jim Bornhop caught a big crappie and a channel cat. Dave,Tom, Mike and Bink all caught fish.They were all using the spoon except for Tom which uses a finesse worm. The wind came up at sunset and I came in after I lost my spoon. It was the first one that has been lost for about a month and I am not happy about it. I cannot afford the $5 as all of my money has been spent on resort improvements. Maybe I can get Bink to loan be a couple of used ones. I like the 1/4 ounce with a green back and red eye the overall best this time of year. They were hitting it very well when it went missing about 5:PM. It looks like the people that love to fish in high winds are going to get their wish for the next several days. We have a chance of getting up to three inches of rain by this weekend when the cold front gets here. We are very dry and can take a couple without any trouble if it does not come too fast.  It should be good fishing with the low pressure until then. The same conditions that created all of the nasty storms last week are going to happen again but it looks like they will be further north. When the very warm moist fronts collide with the cold fronts nothing good happens and this is going to happen it is just where. I wish nowhere but for sure not here. It was close enough last time. The lake overal is in excellent condition and the fishing has gone from fair to almost good.  Yes we are open all year and that includes before and just after Christmas. No need for me to go on any vacation as all I want is here on Norfork lake now that my daugher lives right up the road. Come on down. We will not charge you too much.