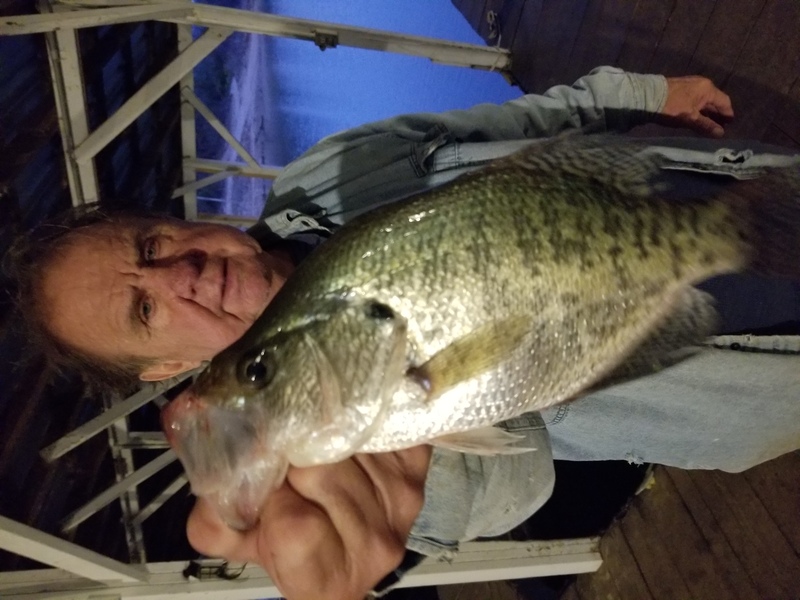 The lake level is 551.93 and has dropped two inches in the last 24-hours with them alternationg between 1 and 2 generators for several hours. It is dropping much more rapidly now and should keep it up unless we get a big rain. It is very dry here and we could take an inch or two with no problem. Bull Shoals is 4-feet below the top of the power pool and we are about 2-feet. The surface water temperature was over 56 when I went out yesterday and the lake was pretty clear and you could see your lure down about 6-feet in deep water and much clearer near the shore. Most of the crappie have moved out into deeper water for some reason and I am fishing my deeper brush piles for them, bluegill and Kentucky Bass. Walleye have eluded me for a few days. The catfish are still biting on the steeper river channel banks just at the drop-off. I am catching them on spoons. White Bass are just outside of brush about 40-ft. down no matter what the water depth is. Most of them are about two years old and about a foot long. Last year they were about 8-inches long. A few bigger ones are with them but not many. If people would leave them alone for a couple of months we could have a good spawn and be on our way to them making a comeback but some need the meat bad. The trollers are catching several of them and a few stripers in the 5-8 lb. range. I found a school of them on one of Harvey Hall's brush piles near Cranfield Island but left them alone when I found out what they were. We need the white bass to be more numerous as they are easily caught and people really like to catch them. One of my favorite sayings is white bass are for people who cannot catch anything else and trout are for people who cannot catch white bass. It was much more pleasant with the diminished wind and warmer temperatures and is beautiful again today. We are to get some rain later this week but I hope the cold front does not collide with the warm air like this weekend. It could happen. Fishing overall is just fair but the lake is in excellent condition but is warmer than normal for the middle of December. Go out in the nice weather and catch a few. The rates on this web page are the rates for 2022 with no increases. Write them down and look for changes. There will not be any.