Mike with a nice catfish caught on a brush pile in Blackburns Creek on the Bink's Spoon. 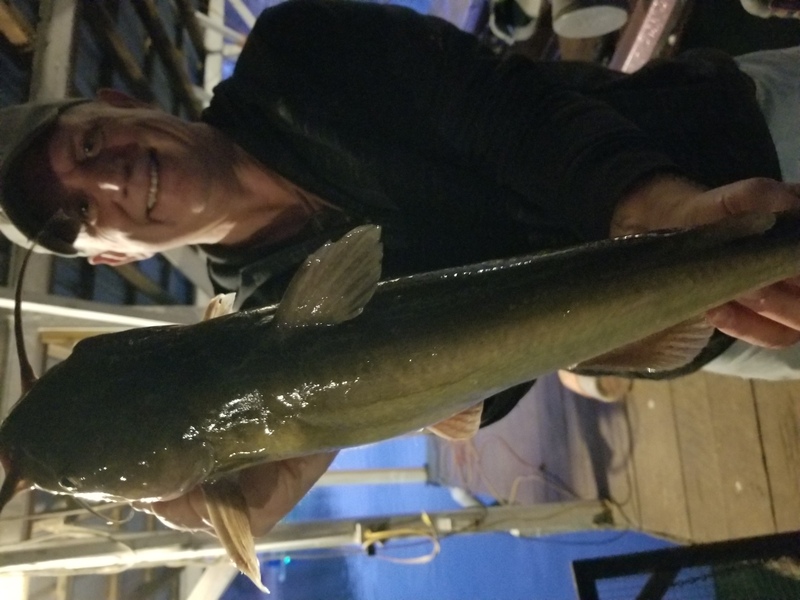 The lake level is 552.13 and has dropped over 2-1/2 inches in the last 24-hours with alternating one and both generators for several hours. The White River at Newport is 3-1/2 feet. The lake should keep dropping with the dry conditions if it does not rain and they need any electricity anywhere. We need it to be 547-48 going into the spring rains. It is at a good level now. The water is clearing and the surface temperature was 58 when I went out yesterday. The wind was blowing white caps all day and did not slow down until about 4:PM finally. It is sunny now with light winds. A little walleye chop is ok but this has been ridiculous. The crappie and walleye fishing has slowed down and bass fishing is not the best. Trollers are catching white bass and small stripers just what we do not need taken out of the lake now with the reduced numbers and spawn just around the corner for the White Bass. Everybody is catching catfish with them feeding before they go dormant when the water temperature drops. I catch a lot of catfish but they are showing up in places that I have never seen them before. A lot of things have changed with the absence of most of the big stripers and the Dawt Mill dam being now gone after the flood of 2017. Fish of different species can now swim unimpeded for several more miles upstream and are showing up futher north in the Norfork River. Also there is much more moss along the bank in Blackburns part of the lake. We never used to have hardly any before. I caught crappie, catfish and bluegill and released a few White Bass so they can spawn in February and came in at dark. Fishing was slow. There were several boats out there in the wind but not nearly as many as a usual saturday which is the busiest day of the week. It is to get very warm again early next week and then rain. We can certainly use the rain. Please no wind and storms. You can keep the windy cold fronts but I will be out there anyway. I do not see how many fish I can kill just like to be out. Yes, Blackburns is open all year, not for sale and are not closed for vacation or for the whole winter but are continually making improvements without raising prices.  I have no other places that I would like to be more than here.