Dave Titus with some good ones. They are hard to come by. 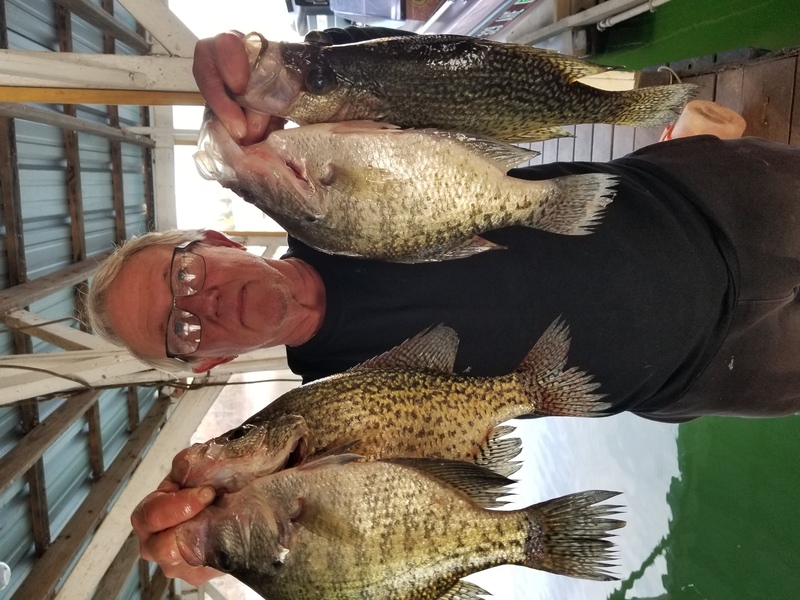 The lake level is 552.35 and has dropped a little over an inch in the last 24-hours with about six hours of running both generators. The surface water temperature was 58.5 last evening when I came in. It stormed east of us last night but no rain or damage here. We received several calls this morning about the storm but assured everyone that it is fine here at Mountain Home. It was very bad in other places and we are fortunate and wish everyone affected well. Several of us went out from Blackburns yesterday morning and caught a few fish before the wind came up. Mike was fishing for walleye and found a school of White Bass that were about 11-12 inches long. He caught several and released them so they could spawn in a couple of months. Their numbers are down and we want them to make a comeback as they are fun to catch. We do not promote killing large numbers of fish but people can do what they want. Catch a few, keep a few and release a few is my motto. I just do not take pictures of dock floors full of dead fish. Catfish, bass, crappie, white bass and bluegill were all caught until the wind came up and there were white caps until late afternoon. I just do not like fishing in the high winds. I do not hate the fish that bad. Fishing overall is just fair and crappie fishing is tough with just a few being caught. It is cold again after the front came through but is to warm up again starting tomorrow and keep getting warmer until the next one. This has been happening at least weekly for about two months now. The lake has dropped 1.32 feet since the first of November. That is not very much but better than rising. It is very dry here and that is not a good going into the coldest part of the winter with litte or no ground water. Overall the lake is at a good level and is in good condition for fishing but the surface water temperature is just too high for the bass to move to their winter banks. They will and I will let you know. I keep checking. Drop a spoon in the brush at 15-35 feet for best results. It is hard to stay on open water fish in high winds when they are roaming. It was 72 degrees for a high yesterday and 48 today. 47 is normal.