James Soltysiak with a sample of what we are catching now at Blackburns mostly everyday. 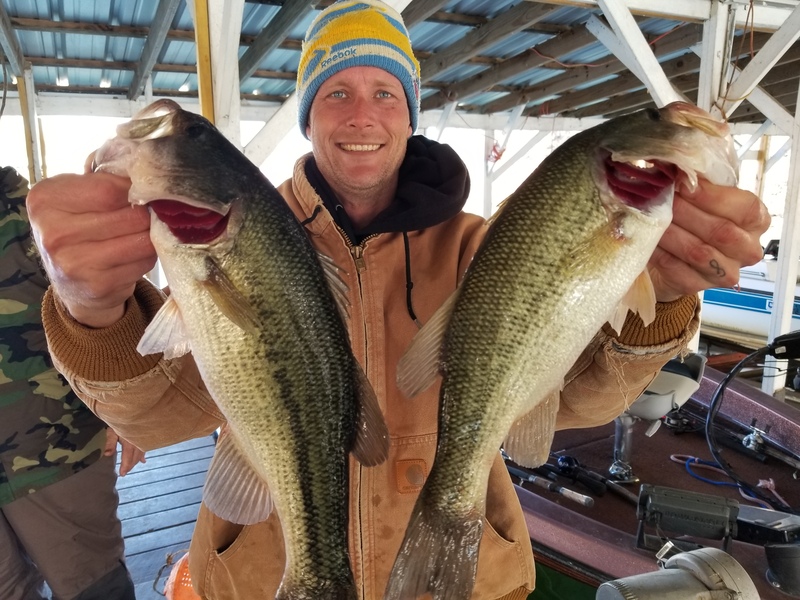 The lake level is 552.44 and has dropped a little less than one inch in the last 24-hours with one generator running for several hours. 552 is what was normal pool for years before they started messing with the numbers and moving them upward for the so-called minimum flow for the put and take trout in the rivers. They changed it to 553.75 and took away 1.75 feet of flood capacity when they implemented that law. It was windy with white caps when Bink and I went out yesterday at about 8:AM bass fishing and was partly cloudy and cool but not cold. We went back into Diamond Bay to get out of the wind on a known winter bass bank using the green grub on the bottom. The water surface temperature was just under 58 degrees. We usually fish this area just after Christmas but wanted to check if they big largemouth had moved in yet. Bink caught a couple of nice Kentucky Bass but the largemouth were not there yet. We moved further back in the bay and switched to brush piles using the spoon and caught a few more Kentuckies and several very large bluegill. No crappie ot largemouth. Bink is one good bass fisherman and I learn something every time I go with him. When moving around we saw a few schools of white bass at varying depths but al about 40-ft. down suspended but they were small. We came in about noon and had a great day as the sun came out and warmed things up. I do not fish the south end of the lake much and it was a good change for me but the fishing was about the same as in Blackburn's area but less crappie. We saw only one other boat but there were several trailers at the boat ramp at Quarry when we came in indicating that there were some out there somewhere. We will see what the day brings. Others fishing out of Blackburns also caught several bass and a few crappie and some catfish. This has been a good year for catfish especially in open water on shad for some reason. There weather is to warm with wind today and then another cold front is coming in. Fishing overall is just fair and the lake is in excellent condition for fishing and the water is clear especially near the bank. Do not expect high numbers at this time. Our normal high for this time of year is 48 and it is very cool early, warms up in the middle of the day and cools off quickly at sunset. Bring appropriate clothes. I can pick the best fishing days before the cold front and wind but it is impossible to do so for several days in advance so if you are coming here to fish expect some pretty good days and some not so good. I catch fish everyday but some are much better that others. It is hard to find feeding fish in open water but if you do it is also hard to stay on them. The schooled fish are moving continually but some can be caught and several species are together on shad. I just get tired of following them around and know where the brush piles are and they do not move and I put some of them where I can get out of the wind most of the time. We have had lower than average rainfall for the last 5-months and the ground water is low and conditions are dry. Otherwise the lake level would be higher.They are not doing anything to drop the lake much and we are lucky to be where we are now. Dropping slowly is better than no drop at all. Just keep the level between 547 and 559 and everything will be fine.