Mike Eakle with a couple of nice walleye on the spoon. 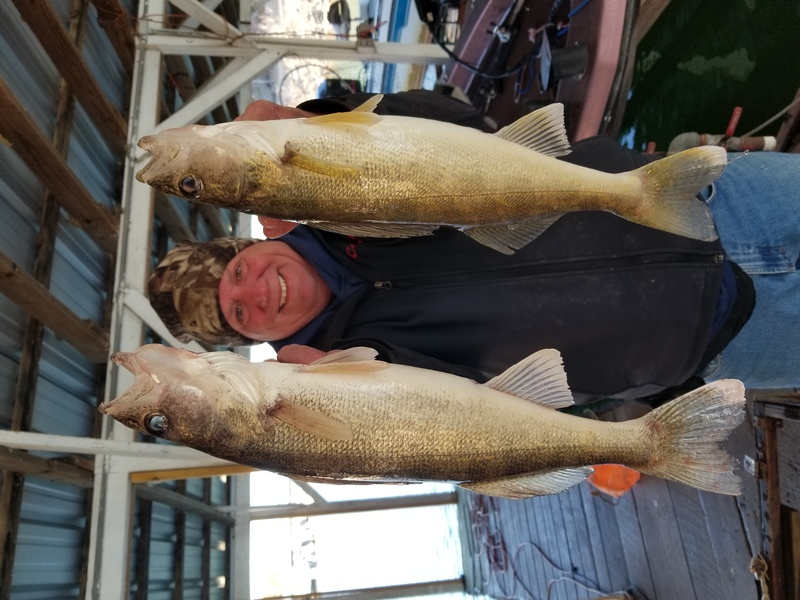 The lake level is 552.52 and has dropped 1-1/2 inches in the last 24-hours with several hours of alternation between one and two generators. The White River at Newport is just over 3-ft. and we remain below average on rainfall. The surface water was 58 degrees yesterday afternoon with the sun warming the water when I went out and it was a nice day with the ambient temperature in the high 50's with a light southeastern wind. Again I alternated lures from a spoon to a jig with most fish coming on the spoon. I caught four keeper bass and two nice crappie from 3:PM to 5:PM fishing main lake points brush in 25-35 ft. of water allowing the lures to touch the bottom. I did not see many fish on top of the brush except for a few bluegill. It cooled off quickly at sunset so I came in. Fishing overall was a little better and it needed to be and I did see a couple of other boats out there but not many. I am going out with Bink this morning to get an annual fishing lesson and will be on the radio at 8:45 AM on KTLO 97.9 with LIve in the Boat. I will give a report. Mike caught some nice walleye and Tom caught some bass in Float Creek.