Tom Kelly with a couple of nice ones. 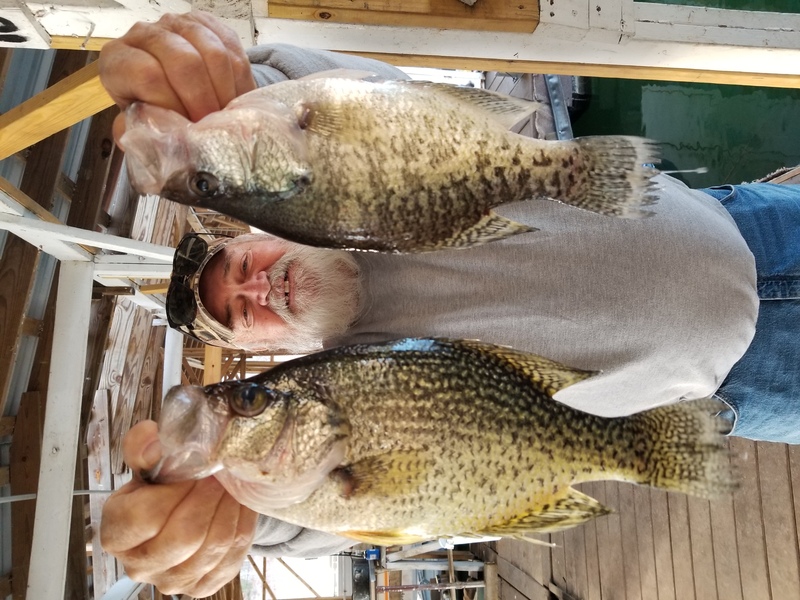 The lake level is 553.11 and has dropped one inch in the last 24-hours with about 4-hours of generation. The surface water temperature was 60 when I went out yesterday and the water seemed to clear a little especially in the creeks. It was very warm and great to be out. We have a good chance of rain tonight and tomorrow and then the cold weather is to return with highs in the 40's. It was nice while it lasted but it looks like winter will be here soon. December has been our coldest month the last several years and it was very cold last winter as the lake froze part way out of the creeks in January. That does not happen very often but has about three times in my 27-years of living here. Just keep the ice away and we will be fine. No more ice storms. Fishing changed a little bit for me yesterday. I could not get the crappie to bite on top of the brush and had to fish for them deeper near the bottom and that was slow. There were some white bass with the crappie but most were small and the biggest one was about 1-1/2 pounds. Tom, Dave, Mike and Jim all caught fish but had to work for them. I caught a couple and switched to bass fishing. They were on the bottom in 30+ feet of water and mostly Kentuckies. If it was not for white bass and Kentuckies it would have been a very slow day for fishing. Almost all fish were caught on the spoon and the crappie would not hit a minnow on a slip float. We had one troller using an umbrella rig and chugged all day for two fish. At least he caught something. This was the slowest day in several weeks but everyone caught a few fish and it was nice to be out in the warmth. That is about over but nice while it lasted. When the water cools to the 50's the black bass should move to their winter banks. I am ready for that especially the smallmouth. It is the dark of the moon and when it gets dark it gets dark and when the sun sets it cools down fast.