Dave Titus with a couple of yesterday's catch. Caught more too. 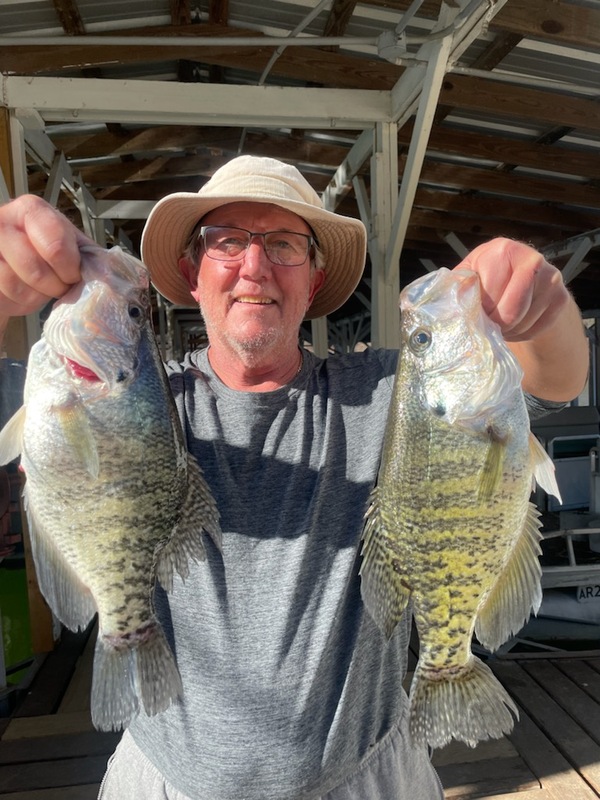 The lake level is 553.22 and has dropped 1-1/2 inches in the last 24-hours with several hours of running one generator and they are now running both for the first time in months. The White River at Newport is up to 3-ft. from a low of 1.5 feet yesterday. The surface water temperature was 60+ when I went out yesterday afternoon and 59 when I came in at dark and the water was stained a little green in both the creeks and main lake and you could see your lure down just a few feet. It is much clearer near the shore. Some very nice fish were caught by several good fishermen yesterday with some walleye in the 3-4 pound range and crappie at about 15-inches. Everybody caught fish. I am determined to catch some larger black bass but am having a hard time. I worked a good bank yesterday and fished it hard and only caught three keeper Kentucky Bass. They were nice sized but not what I was looking for. I have been catching crappie almost at will and wanted a little change. The larger crappie caught were deeper than in previous days and were near the 40-ft. range on the deep brush on a 1/2 ounce Bink's Jigging Spoon. I had been fishing 25-30 ft. brush on the 1/4 ounce spoon but the fish were smaller. Not these. I just caught a few deep as they all die and my self imposed limit is 5-day. I fish everyday and do not want or need a big ole stringer of dead fish to try and impress anyone. Those days are over. All that happens is you fish out all of the good places. Catch a few keep a few and release a few. Walleye fishing continues to be pretty good with some nice ones coming in but not a lot. White Bass are showing up on the deep brush with the crappie but are mostly small. I see several trollers out there chugging around dragging umbrellas and clipping weights on crank baits but the fish they are catching are mostly small and they have to go several miles to catch much. There are a lot of schools of shad that have no predator fish on them but if you drag something through enough schools of shad long enough you will catch some fish. I prefer feeling the hit and setting the hook instead of letting the rod holder do this and just reel them in. I guess that is ok if that is all you know how to do. Several trollers have turned into spooners and several striper fishermen have turned into crappie and walleye fishermen. Go out a little deeper and size up a little on the spoon to get down there faster and also keep your spoon straight up and down. Try to keep right on the brush as much as possible. Go against the wind with your trolling motor and use it as sparingly as possible and shut off the anchor or spot lock which just keeps hunting and spooks the crappie. You might catch some crappie using the anchor but they will not be the big ones as they are too spooky.  This is a fun time of year and I will find those larger bass without trolling miles to do so. They just are not on their winter banks yet. They will be. I like catching those smallmouth bass but release all of them. Keep the Kentuckies and release the largemouth and smallmouth. They eat better anyway and that is what they are in there for.