Mike Eakle with some good ones on the spoon. 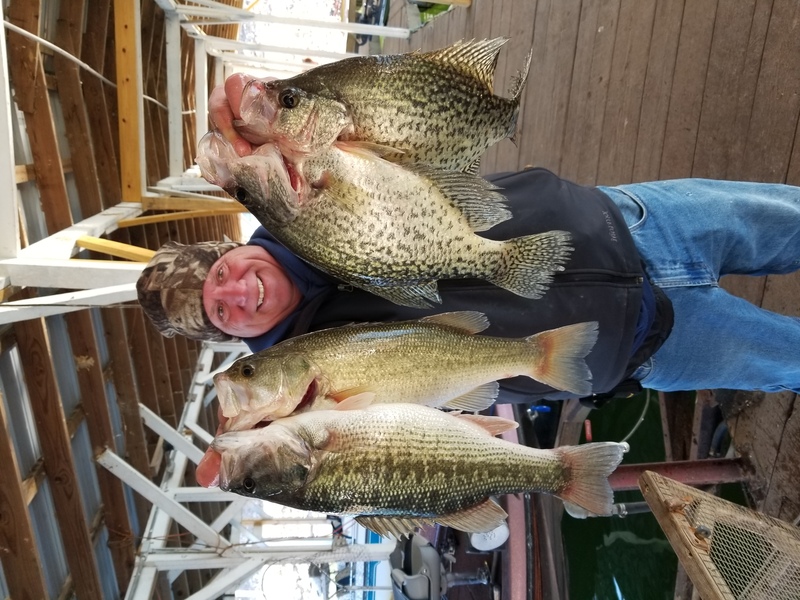 The lake level is 553.38 and has risen just a bit with absolutely no generation for the last 24-hours. We are now in December and still no sign of dropping the lake for the winter. It was sunny and warm with a high in the high 60's with no wind when I went out yesterday afternoon. I was targeting crappie on Blackburns brush piles and enjoying the warmth and being able to stay on the brush easily with no wind and getting plenty of vitamin D. I was using a Bobby Garland blue Ice jig on a 1/16th ounce white with red eye jig head and jigging straight up and down right in the brush near the bottom. The fishing was not fast and furious and nothing hammered or slammed anything or was in a feeding frenzy but several nice fish were caught until just before dark. There were no giant ones but most were in the 11-12 inch range with no short ones. More fish of other species were expected but only one small bass and one bluegill were caught. No Kentucky bass like I have been catching other days. The water had stained a bit with a lot of moss floating near the shore or attached to rocks and the brown cedar pollen was floating everywhere. You could see your lure down only about 3-4 feet even in the bright sunshine. The very low generation rate is not washing much away downstream and there is quite a bit in the windblown cuts. The surface water was 60 and then dropped to 59 after sunset. It has not changed much in several weeks Even if it gets warm it will not change much with the short days and cool nights.  I cannot report on other species now as I did not catch any yesterday. Things change almost daily this time of year with the cold fronts and a week old fishing report is no good. You have to be out there everyday. Fishing overall is just fair but the lake is in good overall condition and at a good level. Those striper fishermen better quit killing those small stripers or we will be another Lake Texoma with small fish and our fish are Marine Species and do not spawn here like they do in the Red River. I guess they will just keep hunting them down and killing them until they are all gone except the small ones which are stocked to the tune of well over a hundred thousand a year. I would like to see the limit lowered until the fish make a comeback if they do. I want to see it the way it was several years ago when people bragged about a 40-lb fish not an 8-pound one. The Game and Fish introduced a North Carolina strain of stripers in Norfork this summer in hopes they will not die off like the ones in the last several years. If this does not work I suspect they will stock more hybrid stripers and less ocean stripers. They will not find this out if people kill all of them off before they have a chance to grow. The results will take several years to analyze. Me, I will stick to crappie, walleye, bass, bluegill and catfish until this gets straightened out and quit fishing deep. Old habits are hard to die.