John Bornhop with a very nice one fishing brush in 32-ft. of water on the Bink's Spoon. 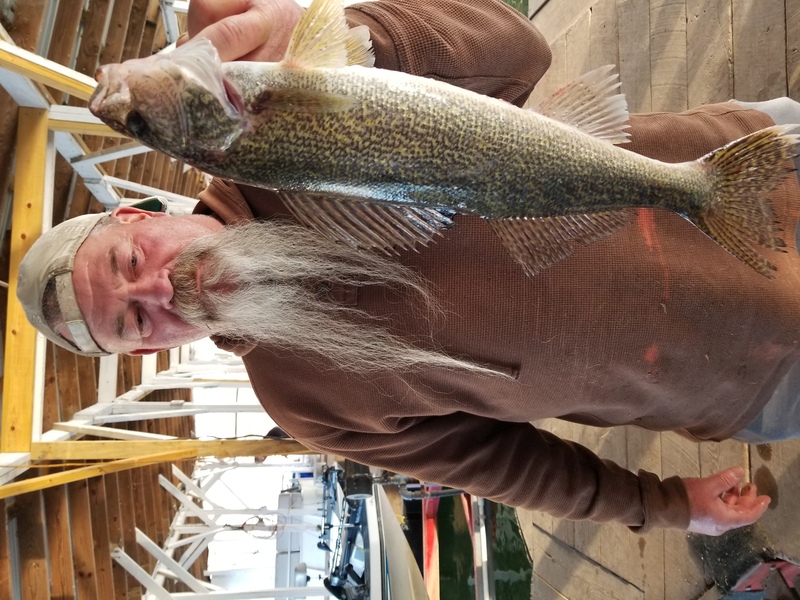 The lake level is 553.35 and has risen just a bit with two hours of running one generator in the last 24-hours. The White River is now at 1.46 feet at Newport and they cannot launch a boat there. December starts tomorrow and they have shown no signs of dropping the lake for the winter. It is a good thing it has been dry or it would be higher. Maybe their plan is to drop it later to an unreasonable level to prove a point. How do you want your steak, raw or burned? I will take mine medium at 546-48 in the winter and from 552-559 in the summer. The surface water temperature was 59 again when I went out yesterday and it was sunny and nice with the wind coming from the southeast and a high in the mid 60's. The crappie fishing was not as good and I had to work harder to catch them but I did. Again, the fishing was slow until about 4:PM and then picked up and then stopped again just at dark. I cannot see in the dark anymore anyway. Bass fishing is picking up but not where it should be yet. It will be. They are there. Crappie, walleye, catfish, bluegill and Kentucky bass are all in the same place on brush from 25-40 feet either on the bottom or suspended at various depths. Crappie are coming up shallow late evening as are bass. Work the windblown shoreline part way back in the creeks out to about 15-ft between the brush and the bank. I am using a 2-inch white twister tail grub on a 1/16th ounce jig head tipped with a crappie minnow from about 4:30 PM until dark. You do not have to tip the grub but you will catch twice as many fish if you do. Open water fishermen are trying hard but only catching a few fish. Normally temperate bass fishing is very good now until it gets cold but not so much this year. Some are being caught though. I watched the video on Black Bass management and prescribed fishing regulation changes for Norfork Lake. I really like winter bass fishing and feel that it is as good as it has been for years and I compliment the Game and Fish for making it happen. As far as regulations are concerned, I do not keep any largemouth or Smallmouth Bass and do not have a problem with the 15-inch limit. Many people do not keep bass anymore and I do not think the regulations affect the population as much as several years ago when meat hunters killed everything they caught like the walleye and striper fishermen do now.  Kentucky Bass are for eating and there are plenty of them. Taking the size limit off them does not bother me but they can be caught more easily when the black bass get scarce. Many people want to catch fish no matter what species they are. Bluegill (bream) are big and plentiful this year and people are having a good time catching them. They are also the best eating. While catching bass over 5-lbs. is good for tournament fishing and hard core bass fishermen a lot of people just want to catch fish. When they cannot catch any they are not happy. It is really fun watching children catching crappie and bluegill off my dock. They get so excited. I do not think there is an over abundance of bass in this lake and too much competition for food especially with the absence of the large stripers. I am sure they will do what is best for the lake and that is what the local Biologists want. I just like to see people catch fish, big ot little.