Craig DeHoet with some nice ones. 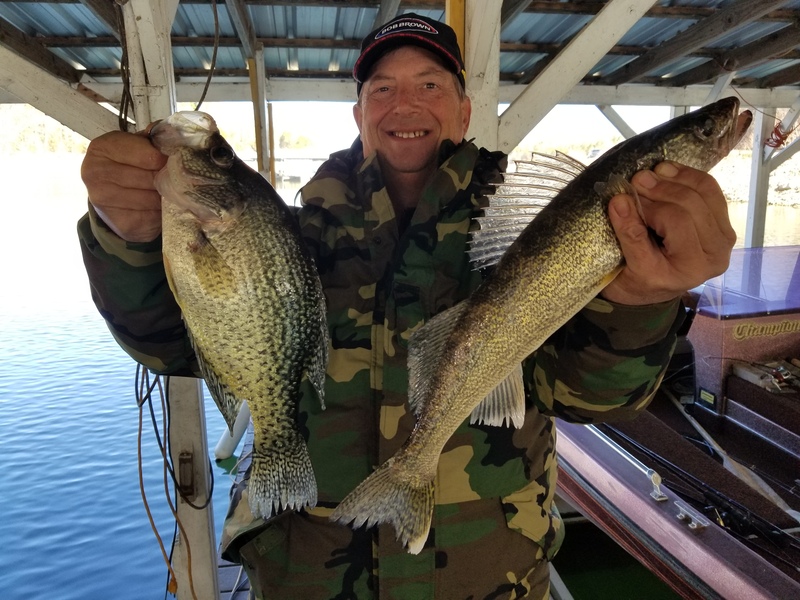 The lake level is 553.35 and is exactly what it was at this time yesterday with about two hours of running one generator. They have now dropped the White River a Newport to a little over 2-feet and are letting it almost dry up in order to keep from dropping the lake for the winter. If they have a plan is is greatly disguised. I suspect they want to hold it up all winter and then when the spring rains come hold and hope again, blame it on the rain and say that is what the dams are for when it gets high. That is getting old. It was a beautiful day again yesterday when I went out in the afternoon. The other resort fishermen mostly went out in the morning and caught some nice fish including bass, crappie and walleye. I caught my self imposed limit of five crappie, a few very large bluegill and then went bass fishing and caught some nice Kentucky Bass just off the bank in about 12-ft. of water. The fish again started biting well at about 4:PM and quit just before dark at about 5:PM. It was slow before that. Right at sunset is the best time for me. We are to get warm weather with highs in the 60's to early 70's for at least the next 5-days with sunny skies and I like that. It was in the high 50's yesterday and the water temperature remained at about 59 degrees and it looked like it stained up at little but not much. When I came in there were huge bass, crappie and bluegill under my light on the dock. I feed them chicked feed pellets which sinks slowly and floating catfish food and they were swarming around it. It was fun to watch them. There were few boats out there in the evening but several in the morning. It was foggy this morning but it burned off just before 8AM. I have more plumbing to do today and then will hit it again this afternoon. There will be no price increases here at Blackburns this year and we remain the lowest priced major resort in the area but that has not stopped the improvements. Our repeat customers like that and we have a lot of them.You will like what you see when you get here and we will not charge you too much.