Norfork Lake Arkansas near Mountain Home in the Ozark Mountains Region by Scuba Steve from Blackburns Resort and Boat Rental.

James Soltysiak with a few of yesterday morning's catch. He caught more in the afternoon. 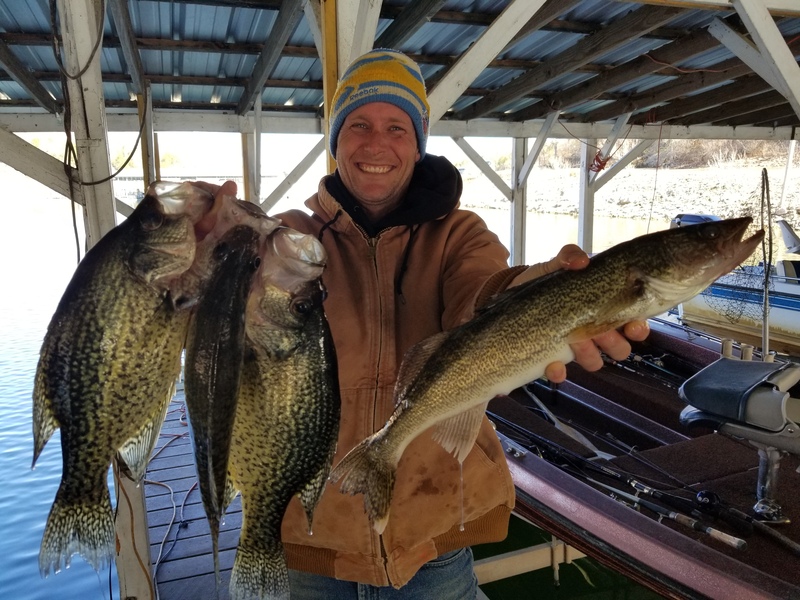 The lake level is 553.34 and has risen just a bit in the last 24-hours with absolutely no generation. The White River at Newport is still at 3-ft but is up from 2-1/2 feet yesterday with December approaching and still no effort to drop the lake for the winter. The lake has been within 1/2 foot of the power pool for weeks. We need the government to run more things. It was a beautiful day yesterday and the fishing was excellent for myself and Blackburn's several guests. The fish that usually show up for Thanksgiving came forth and were only a couple of days late. The big crappie and bass were biting and also a couple of nice walleye. Everyone was using the spoon on brush. A few White Bass were also caught but they were small and I usually do not take pictures of White Bass unless I cannot catch anything else. Dropping the spoon in and around brush in 30-ft. of water produced fish for everyone. It was sunny and warm with light winds and a perfect late fall day. It started off cool and then warmed. The surface water temperature was between 59 and 60 and the water was clear and you could see your lure down about 6-ft. on the main lake. Several are out now in the beautiful sunshine and we will see how they do fishing. I have some work to do and then will be out later. This is an example of how putting in brush piles pays off for Blackburns customers. More resort owners should do this for the good of the lake. The ones refurbished by Game and Fish a couple of years ago are starting to get old now and could use some freshening. That had not been done for several years and needed it badly and they did an good thing. It kept some people off of mine for a while. This is the time to catch some big fish including largemouth bass which had been eluding me for a while until now. Some of the crappie caught yesterday were giant. If you stay at Blackburns you will not have to pay for your first boat stall and not have to stay in a duplex with no porch while paying too much. We especially welcome Veterans and Police.