Two of the biggest crappie caught by Scuba Steve yesterday. 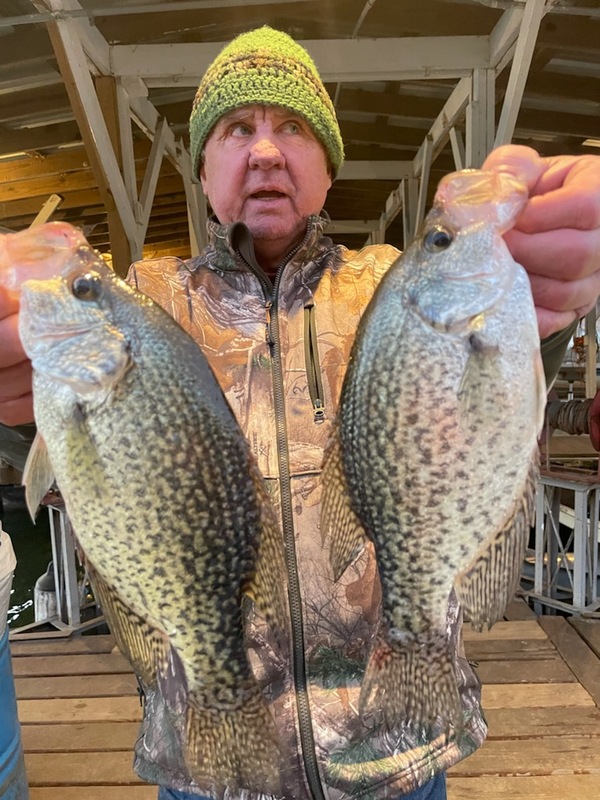 The lake level is 553.40 and is down 1-inch in the last 24-hours with one generator running about 4-hours. The White River at Newport is 3+ feet and there is still no effort to drop the lake and we are headed for December. The lake surface water is hanging in there at about 60 degrees. A little lower early morning. The water is clear and you can see your lure down to about 5-6 feet when the sun is shining. I started out on a 30-ft. brush pile about 3:PM and it was windy from the south east. I started spooning near the bottom and caught three Kentucky bass and a bluegill in about an hour. No crappie. I could see them down there but no bites. I switched to a Bobby Garland baby shad and started fishing shallower. The crappie had moved up to about 9-10 ft. down and started to bite for about 30-minutes on the drop and then quit. The wind would slow for a couple of minutes and then gust up white caps again. My self imposed limit is five so I quit and came in. Usually I would work the bank at this time until dark but just came in instead. For the last several days the crappie had not been big (11-12 inches) but today they got bigger as the evening progressed until they quit. Shown above are two of the biggest ones. These are what I have been looking for. Bink reports that he is on the temperate bass of all kinds in a bay near his boat. He says large schools would pass under the boat and then when he would drop the spoon and catch one they would disappear again and he would move slowly with his trolling motor until he found them again and catch another one. They are not moving far. Some of the stripers are approaching 10-lbs but most are smaller. There is a distinct absence of large white bass. There are some but not nearly as many as a couple of years ago. He likes to catch them. I will stick to walleye, crappie, Kentucky Bass, Bluegill and catfish. He says he will start fishing for bass on creature baits soon when the water temperature gets to be about 57. We both have not been catching hardly any big largemouth but he assured me they are there and in good numbers. Smallmouth will start to show up also soon. Come on down to Blackburns and we will not charge you too much and your first boat stall is free. If you must pay more just stay here and give the difference to Disabled Veterans. They need it worse.