Dave Titus with some good ones. 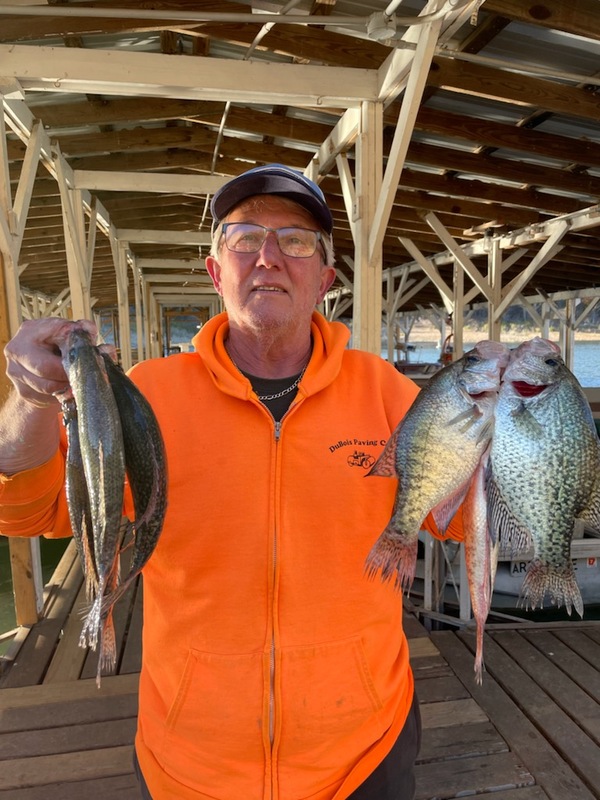 The lake level is 553.56 and has risen just a bit with a little over 2-hours of a little over one generator running. Still no effort to drop the lake. The surface water temperature was 61 when I went out yesterday afternoon and it was in the 50's for an ambient temperature and the wind was blowing from the southeast but not bad. It picked up at dark instad of diminishing. There is no change in the water clarity. I saw only an few other boats and there were two of them camped together about 1/2 way around Mallard Point on the way to Cranfield in the middle of the lake in about 50-60 ft. of water. Otherwise only about one other one went by. I saw some shad with a few white bass and small stripers on them in that area yesterday. This is prime time for them and I expected more and bigger ones to be caught. The open water fishermen are trying very hard and long for a few fish. They are roaming and it is hard to stay on them but this is as good as it gets until the top-water bite in April and May. The schools are smaller and further in between but it looks like some are still hunting down and killing the small ones. I was trying to stay out of the wind on brush and catching my usual crappie, Kentucky Bass and bluegill on the 1/4 ounce spoon. Again fishing was slow but steady and I caught several of each until just before dark when the bite completely stopped. The big crappie in the 15-17-inch range are eluding me for some reason but the ones that I am catching are up to 13-inches and very fat. I wanted to smallmouth bass fish but it was just too windy for where I wanted to go. I know bass bite well in the wind but I just do not like to fight it. The conditions will be right for me soon and then it will be time. My pole is rigged and ready. It is raining a bit now but is to quit soon and should make for good fishing conditions before the cold front. I bought a new bathroom vanity and cabinet for cabin #4 and a new kitchen stove for cabin #1  and they need installed before the next group comes in but should be able to get in some fishing a little later today. I do not have to plan very far ahead. Go 400-yards to the dock, drop the boat off the lift and head out. Noe that is a plan.