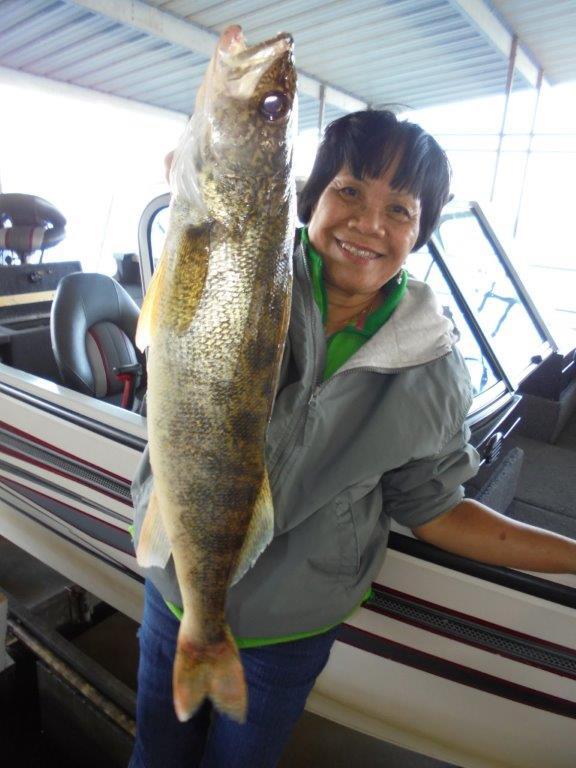 The lake level is 553.54 and is exactly what is was at this time yesterday with one hour of generation. They are set on keeping the White River at Newport at between 4 and 6 ft. for some unknown reason and holding Norfork at right at the power pool of 553.75 which has been close to that for several weeks. At least I have not had to move my dock. The surface water temperature is in the early 60's and has not changed much either. The water has quit getting more clear and is also remaining about the same where you can see your lure down about 6-feet and a little more in the sunshine. None of this is bad and the lake in general is in good condition and at a good level but with not much room for a big rain which we will get. The fishing varies with the cold fronts which come through at least once a week and sometimes twice. The few stripers that are being caught are mostly small and need to be released if we are ever to get very many big ones back. Otherwise these guides are cutting their own throats. Some are either going to Bull Shoals walleye fishing or switching to crappie fishing and that is good. If they keep killing all of these small ones Game and Fish might  just as well quit stocking them and give up. I personally would like to see the big ones back like they were but do not fish for them much anyway, but a lot of people do. When I lived out west they were called sea bass and they did not fish for them unless they could not catch anything else. They were on shallow reefs and you could catch them as fast as you could drop a hair jig in the water and the boat hands did not like them as they had to cut the red meat out of them when cleaning and not much was left. Most people did not keep them. Everybody likes to catch a big fish no matter what kind it is. Some people can make any fish palatable out of a clean lake like Norfork, even gar and carp. As for me they can keep them all. I prefer a nice big fat walleye, crappie, bluegill, Kentucky Bass and flathead catfish and you can keep the rest as far as eating goes. We need more carp and gar fishermen. It had warmed up[ a little when I went out yesterday and was just fine. It is a little warmer today but the wind is to pick up before the next cold front sometime late tomorrow. I again stayed close to Blackburns and have no need to go very far away. Also I am too cheap to pay these outrageous gas prices. I had to put in a new pressure tank for my well yesterday and the price had gone up $100 in the last few weeks and I had to wait three weeks to get it. I bought out all of the kitchen counter tops and cabinets out of both stores and they had doubled in price since I had bought the last ones. Now Blackburns will have new ones in almost every cabin. Inflation is going rampant and propane prices have doubled. Insurance rates are skyrocketing. We have published our 2022 prices already and we are not raising them here at Blackburns. Others are getting creative on how to hide price increases so you have to watch closely. Almost all of our customers are repeat and are our friends. We just do not want to charge them too much and price them out of a vacation. Friends do not do that to friends. I caught crappie, bass and bluegill again but not high numbers and no big fish but some pretty good ones. I do not take pictures or keep huge stringers of fish or dock floors full of dead fish. People just do not like that anymore. Catch a lot. Keep a few. The fishing pressure on this lake is growing as fast as inflation.