Mike Eakle with some good ones. 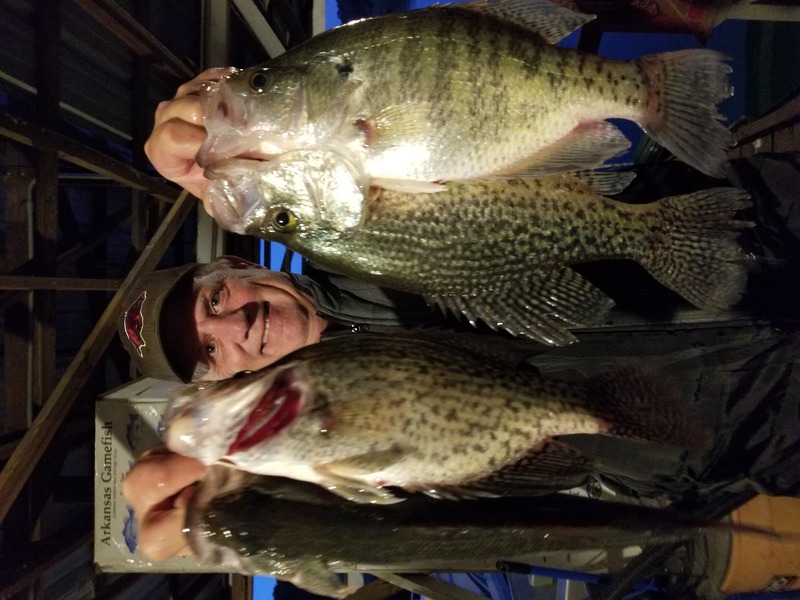 The lake level is 553.66 and has dropped just a bit with three hours of running one generator. The White River at Newport is 4-ft. and they are making no effort to drop the lake. They cannot say they had no chance this year when they let it get too high. It was partly cloudy and very warm with ambient temperatures in the early 70's when I went out yesterday afternoon. The lake surface temperature was 63 degrees and the lake was clear and there were light winds from the south. I spooned in 30-ft. brush piles until about dark and caught a few bass, crappie and bluegill and all of a sudden things changed. The wind shifted to the north west and it started raining hard and there were whitecaps and the temperature dropped several degrees. Now that was a cold front. The fish stopped biting completely. This morning it is sunny and cold and is only to get to 50-degrees. We did not get much rain but here comes the wind again. Bink reports getting some nice stripers and bass in Diamond Bay on the bottom at 30-ft on the spoon. Several different fish are at that depth now and are at the bottom. Crappie are coming up shallow at dusk but are hard to catch. The ones that I am catching are about 14-ft. down suspended over brush and just a little deeper than the bluegill which are everywhere. Fishing overall for me is just fair as it is for several people but I am still catching some good ones. Bass fishing is picking up and I am not seeing anybody striper fishing after dark. The moon will be bright and full tonight. Not as many baitfish are coming up under my light at the dock as before. The whole stall used to be full of them.  A lot of baitfish are north of Cranfield Island  on the points near the walleye rearing pond so there should be some stripers there at dark. During the day they are deeper but not many schools hold any predator fish. Maybe they are feeding during the night or just not there. They should be but there are definitely many less overall than before. I am atill catching a keeper walleye or two almost everyday just before dark. Nothing big.