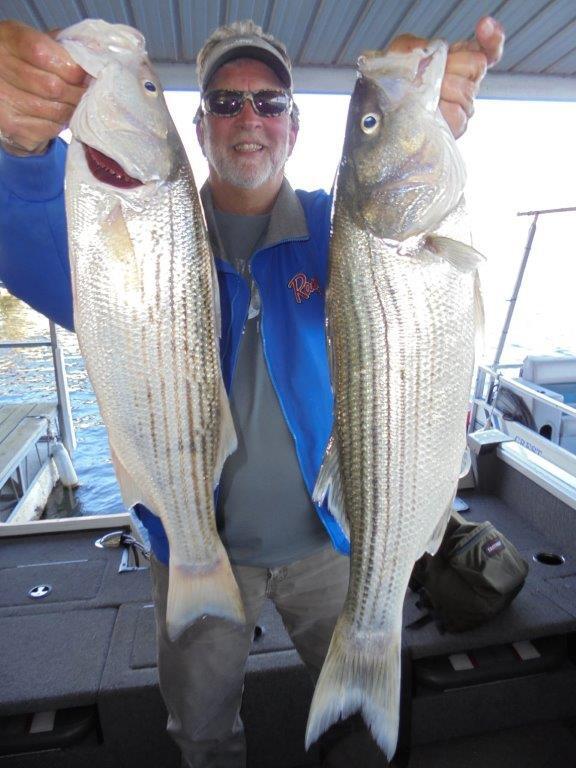 The lake level is 553.69 and is exactly the same as this time yesterday with 3-hours of running one generator. The surface water temperature was 62+ when I went out yesterday evening and the wind was blowing white caps from the south. I went into a north facing cut to get out of most of it and was using a Bobby Garland jig. The fish were biting slowly but steady with most being big bluegill and crappie. The crappie were not large but were all in the 11-inch range and the bluegill were as large as your hand. I ended up catching about 8-fish in an hour and 1/2 from 4-PM until dark. They quit biting just before dark. I took them to Tom Kelly's trophy pond and released them. It is now fully stocked with bass, crappie, bluegill, catfish and walleye for the winter. I always put in a bucket full of tuffies from Nabatak with the fish to feed them until spawn. Bink reports catching stripers everyday with the full moon in November being prime time for them. It is not easy with the reduced numbers but he knows where they are. Tom Kelly is catching some nice bass in Float creek and others catching crappie, bluegill and some channel cats. A few White Bass are with the stripers and hybrids. It is cloudy and warm today and I expect some nice fish to be brought in before the cold front comes through later. There is a good chance of rain this afternoon and night but not much total. November is historically the wettest month of the year here but we are more than 1/2 way through and not much yet. That could change with one rain. The lake is general is in excellent condition and the water is clear. You can see your lure down several feet in this area in both the creeks and main lake. Overall fishing is just fair but some nice fish are being caught every day but not high numbers. We continue to make improvements here at Blackburns but are are not increasing our prices. Some are. We do not want to charge you too much.