Tom Kelly (AKA) Santa with a couple of nice ones released under the dock. Caught more too. 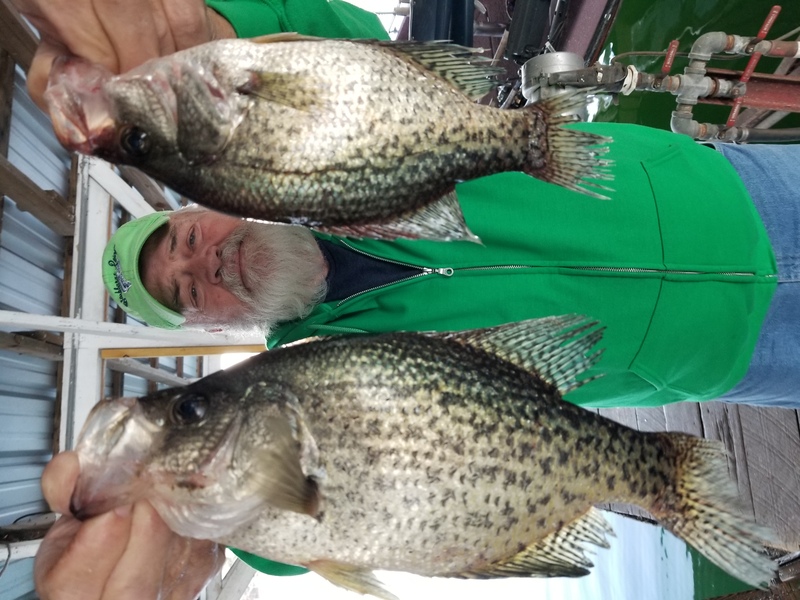 The lake level is 553.77 and has dropped a very little bit with very little generation. It rained just a little yesterday morning but is clear and sunny today. The lake level is stable, the moon is getting big, the surface water temperature is dropping and is now 62 this morning and the lake continues to clear. Overall the lake is in excellent condition but the cold fronts and wind just continue to come through. it was a cold gusty wind and vatiable and changing directions about every minute and it was hard to fish if you did not get out there early. Get out about 6:30 AM to miss most of it. It was still howling in the evening and was cold. Bass fishing is getting a little better and catfishing has slowed for fish of much size. Some small channels are being caught off the dock but not worth a picture. Bluegill were biting the small spoon as fast as you could drop it and I had to upsize to the 1/2 ounce to keep them off. Crappie were the best bite with several being caught. We all came in early and were just tired of the wind. It was just not woth it. I do not hate the fish that bad. It was like December. I do not have much faith in the day after a cold front for fishing anyway and was unable to catch any walleye. Everybody caught some fish though and there were several of us out until mid-morning. More fish were caught this morning and the wind was much better. Crappie, bluegill and Kentucky bass are still the best bite and walleye were good until yesterday.