Mike Eakle with some good ones caught on the spoon on Blackburns Brush Piles. 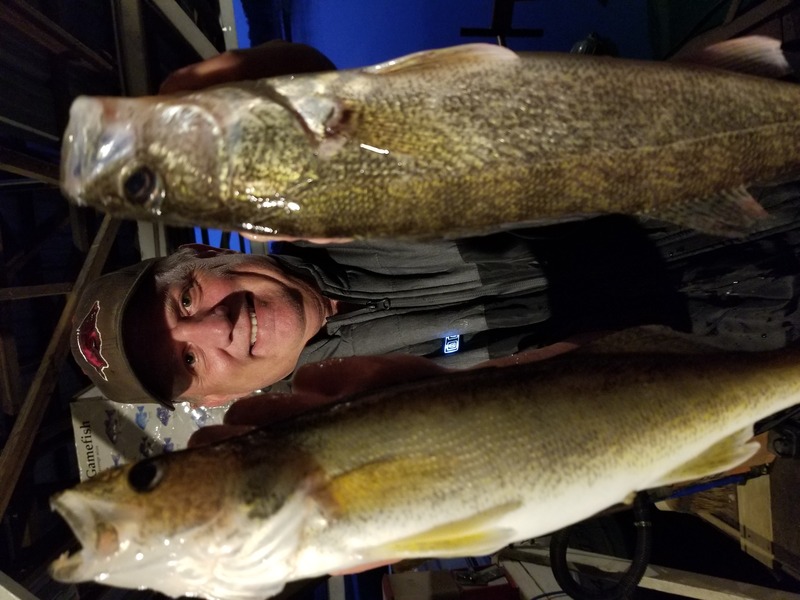 The lake level is 553.79 and has risen over 1/2 inch in the last 24-hours with absolutely no generation. The White River at Newport is now just below 4-ft. This is unbelievable. There is no effort as of today to drop the lake for the winter. All I would like to see is for them to drop it to 547-48 and try to hold it there for as long as they can without flooding anybody out downstream. It would give us a much better chance of not having high water. Get rid of the 12-ft. rule. The bottom of the power pool, which is how low they can drop it if they want to is 510. This is unrealistic and needs to be raised to about 540. This is easily controlled by just quitting generation. The level of 560 is when problems for lake access begins for a lot of people. There are a several out there trolling around for stripers and are working hard for a few fish. I talked to people in one boat that said they had been fishing all day and caught one fish. I gues some are trying to kill off the rest of the stripers that are left and brag about it. Maybe they just cannot catch anything else. There are still several in the 6-9 pound range left but are not getting much of a chance to grow with the fishing pressure.  Walleye are quickly replacing stripers and the most sought after fish and I have a report from Game and Fish about them. The walleye rearing pond was not in use this year due to a collapsed pipe. The piping is old and from the 1960's and needs replaced. They are trying to get funds to do this but in the mean time there were some extra walleye fingerlings left over from the state system and they were requested by our local biologists and were stocked in Norfork. These 100,300 combined with the 223,619 stocked by Missouri made for a goodly amount. This is very good. They also told me the same was requested for next year but had not been approved yet. I sure hope they get them. Crappie are what many people also want to catch and their numbers are good and they are not stocked anymore. The Blacknosed crappie  were for a short period of time for an experiment but that was discontinued. There are now a lot of blacked nosed crappie out there now along with the black and white ones. Bass take care of themselves and are doing quite well. The black bass population is good and the fish are getting bigger. They are stocking the Florida strain in some lakes but not here.  It was windy yesterday but still nice out. Everyone knows fish bite well in the wind but I still do not like it but have to get used to it this time of year. Largemouth especially like it. Crankbaits are the lure of choice in the wind. The surface water temperature is still in the 64-65 range depending on where and when and has been very stable for several weeks as has the lake level. The water is clearing in this part of the lake and overall is in excellent condition.Crappie, bluegill and Kentucky Bass are the best bite followed by walleye and jigging spoons are the best lure. Catfishing has slowed. Overall fishing is just fair most days but good at the prime time which is just before the rain. Not so good right after a cold front and a day or two after the high pressure moves back in.