Caught on the spoon fishing with Bink's Guide service yesterday. 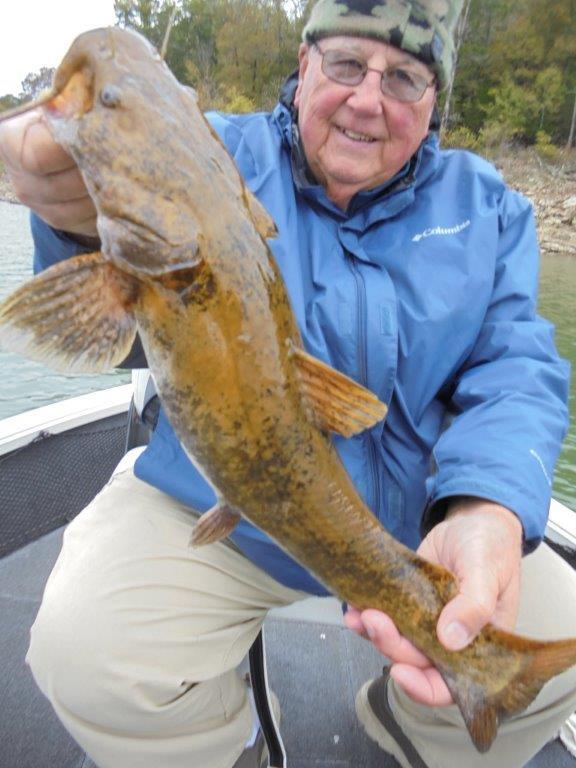 The lake level is 553.61 and has risen 1/2 inch in the last 24-hours with little generation. It is amazing how steady they can keep the level if they want to. Rules only seem to matter if they are trying to flood us out. It is a good level now though and I would like it to stay here all of the time. The lake is still turning over with the lake surface temperature dropping every day and is now 66-67 degrees in Blackburn's area. It is lower up river where the water is shallower. The wind is also dropping the surface temperature and stirring up the water. The visibility is worse in the creeks but they will also clear more quickly. The color has gone from stained green to just a darker color and bubbles are coming up in the shallower water. We are to get our first freeze in the middle of next week and the cold fronts just keep coming through bringing with them wind. It is to be nice today and tomorrow with highs in the 60's. Some White Bass abd Small Hybrids are schooled and have moved out in front of and around Mallard Point to the west. They always do this every year at this time but the schools are much smaller. The White Bass are decent size but there are not many of them. They will spawn in february and march and it is a shame to kill them as they are trying to make a comeback but some people need the meat. I saw no evidence of a fish kill this fall and I do not know if it was because the big fish are gone or most of the vegetation has already died with past floods and did not create a heavy oxygen demand. One thing for sure there was little effort to drop the lakes until the summer was over. I am still catching crappie, bass, bluegill and catfish on main lake points on brush but they are scattered and spread out all over the lake. No big schools. I have not caught a walleye in over a week and longer than that for a keeper.  The catfish are still on the same brush as the crappie but on the bottom. Let your spoon touch bottom and you will be surprised what you catch. It could be about anything. Fishing overall is just fair but you can catch some if you know where and how. Bink is out with some of Blackburns guests this morning and we will see how he does. I bet the red meat fish have slowed and he will be on something else. He takes about 100 guided trips out of Blackburns a year and the vast majority have a great time. I know I do when he takes me out to sharpen my fishing skills. It is usually this time of year but he has not called me yet. The fishing will get better as the lake cools and clears and that is coming soon. I would like to see a warm cloudy day with little wind but will take what I get. I went to the grocery store, filled my car up with gas and bought oil and a battery for a boat and cannot believe the price increases. They are big and everywhere except for Blackburns where you can get a one bedroom cabin for $59/day and a two bedroom for $77/day with three and four bedrooms priced accordingly. We will hold the prices as long as we can and your first boat stall is free. Stay at the best place and get the best price. Cannot beat that. November is shaping up for a good fishing month so far and is right on schedule. I really like smallmouth fishing and it is starting. Leave some of those white bass for spawn. No sense catching huge stringers of fish no matter what the legal limit is. I will miss Bob Knight. He was one good person and I did business with him for 27-years and listened to him on KTLO everyday. He had a vast amount of knowledge on many subjects.