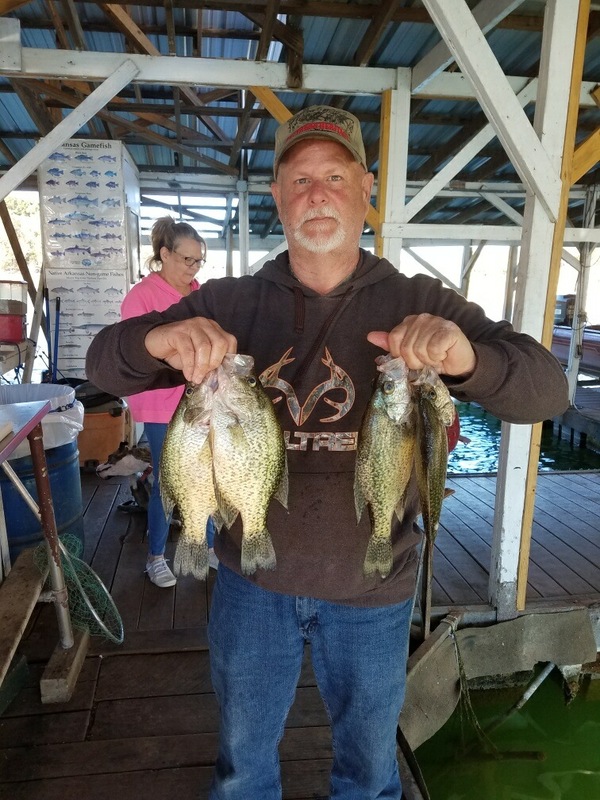 The lake level is 553.25 and has risen a little less than 1/2 inch in the last 24-hours with 1/2 generator running sparingly. They now have the White River at Newport at a little over 4-ft. and it is drying up. They only follow the generation guidelines when they want to. One more day of nice weather and then rain chances again with another low pressure coming in. The surface water temperature was 71.5 yesterday and is dropping very slowly. The fish were biting a little better yesterday with crappie, Kentucky Bass, bluegill and catfish being the best bite. Trollers are starting to pick up red meat fish as predicted with some nice sized White Bass being caught. They are making a comeback but slowly. Many are small. As I have said before we need the White Bass when other fish are hard to catch. White Bass are for people that cannot catch anything else and trout are for people that cannot catch White Bass. That has not been the case for a couple of years. Bink reports the fish are pushing deeper during the day. They were at 30-ft. then 40-ft. and now 50-ft. and still going deeper. He is using his 1/2 ounce jigging spoon. The fish are in the same places just out a little more. He has been on them for several weeks. Nothing is in a feeding frenzy or hammering anything but schools of mixed fish are continuously moving in and out the the same area and will bite if you drop the spoon right on their heads. He is catching all of his fish on the main lake and nothing in the creeks. I am still spooning and jigging brush from 25-32 ft. of water and catching crappie, bluegill, Kentucky Bass and catfish all in the same area. If you see baitfish near brush there are predator fish with them. More different species are on shad in open water now than before with the absence of the big stripers not hogging all of the food. I have never caught so many catfish on spoons than this year and they are fat and healthy. Anytime you find schools of bluegill you can bet there are catfish somewhere close. I am still not catching very many largemouth bass because I do not troll around in open water where a lot of them are now. They will move to the bank later as the water cools and more will start to show up. There are plenty of them in the lake. Big smallmouth will start biting soon. It is very peaceful out there now that the big fishing tournaments are over and the wake boats and jet skis are gone. The cold fronts just keep bringing the wind and you about have to get out early and go out again in the evening to get out of it. The lake will start to turn soon and how long it takes to do so will depend on how fast the water cools. After that is over and the water clears the fishing will get better again. It is usually in the process or finished by now but the temperature has held in the warm weather. Blackburns still has $59/day cabins and your first boat stall is free. Come on down. We will not charge you too much.