Scuba Steve with the best ones he caught yesterday on the spoon. Released under the dock. 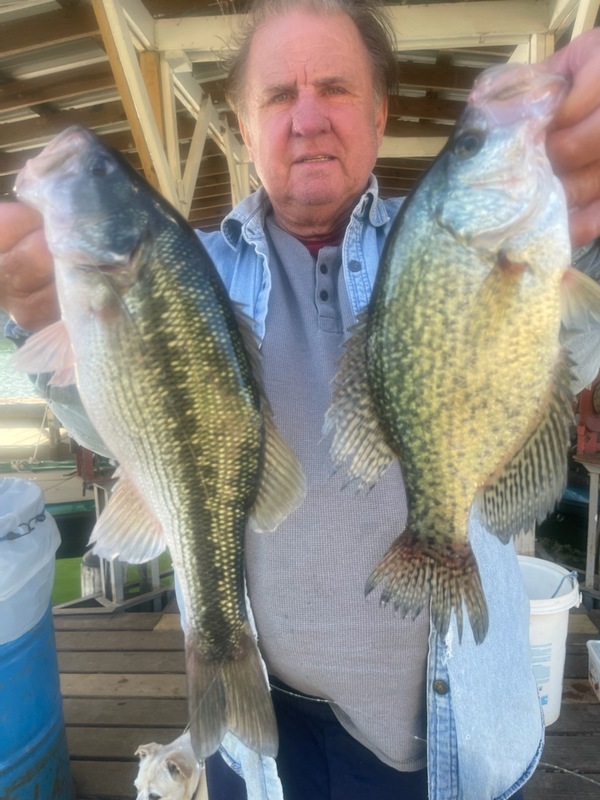 The lake level is 553.03 and is the same as yesterday at this time with 4-5 hours of running one generator. They are really reluctant to let it drop past 553 and it has taken weeks to drop 0.75 feet after the Power company took over control of generation in late September. They will have to completely shut down all day to stop it today but nothing the government does would surprise me. The surface water temperature was 74+ when I went out yesterday afternoon after the Bass Cat Tournament closed for the day. It was a beautiful day with very light winds and I was able to use the jigging spoon and keep it straight up and down in brush without losing any spoons. The lake is getting more and more stained every day.  The fishing was not fast, none were in a feeding frenzy, I did not lose any fish but did catch a few pretty good ones to be released under the dock. It was very nice to be out and most of the boats were off the lake. It rained last night and there were variable amounts around the area. We recieved 0.9 inches here at Blackburns. Some got almost none. They are predicting strong storms on Sunday and Sunday Night with high winds. We will see. I will tighten up my dock cables, triple tie my boats and hope for the best. I do not like wind. We have missed everything all year and it would be a shame to get it now at the end of October. Ambient temperatures are to get near 80 followed by another cold front. Today is nice though and I take it one day at a time. I do not know if 85.75 inches that is leading the tournament is good for a fishing tournament or not. I have caught 20-inch bass with big heads that were long and skinny and did not weigh much and 18-inch ones that were fat and weighed more. I understand the non-contact rules for Covid but an outside weigh-in worked for other tournamnets with no super spreader but I am not an event organizer. I have had both my vaccines and the booster and have put it behind me. I wish them good luck today and hope the weather works for the top 25-tomorrow and am glad they are here and hope they come back. We have a lot of friends with Bass Cat boats. If clean boats made for good fishing they would catch 40-50 pounds a day and I would get none.  Fall foliage has not changed much and the wind tomorrow will not help it any. We have not been near a frost yet and they are still making chlorophyll. There is still time but it is running out.