Kenny Stengel from Lansing, Illinois with some of yesterday's catch. One of those crappie is very big. 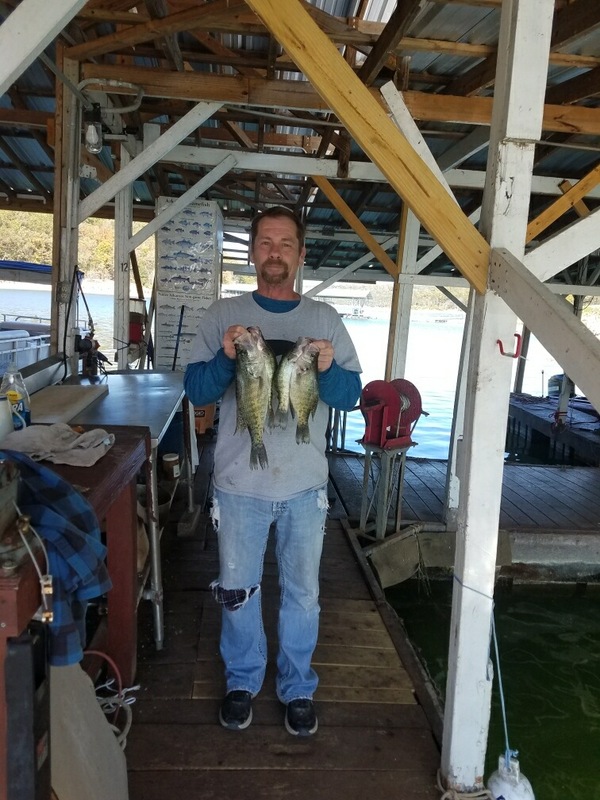 The lake level is 553.11 and has dropped 1/2 inch in the last 24-hours with one generator running about 4-hours. The White River at Newport is now 4+ feet. The surface water temperature was 74+ when I went out yesterday and again it was a beautiful day. A little windy but not bad. I again tried to go part way back in a creek to get out of the wind and again the fish were not here. I am getting almost all of my fish on the main lake except for some bluegill. I caught bass, crappie and bluegill and released them under the dock. No big fish. The dock school is getter bigger and the children are having a good time catching them. This has been the best fall for big bluegill in several years. The temperate bass are moving to the wind blown banks at night to feed and then going out and suspend at 50-ft. after sunrise. Some are small but some also are in the 8-10 lb. range. There are not nearly as many as in the past and not very big but some are still there. I guess people will keep killing them until they are all gone. They will get scarce again when it gets cold. The Bass Cat invitational starts tomorrow and then again on saturday with the top 25-having a fish-off on Sunday. There are drastic rule changes due to Covid. You have to have a smart phone and take pictures of them instead of the regular weigh-in and you will qualify acording to length. I do not qualify even though I have a Bass Cat because my flip phone does not take pictures. I have a Hummingbird 4-ID fishfinder but have been meaning to upgrade it Since 1989 but am too poor. A $800 phone is out of the question. I prefer to spend my money on resort improvements and the place is looking good. We are full and mostly are Bass Catters taking advantage of the location, launching and parking facilities and not least the best price on the Lake. We are happy to have them. This has been the busiest October ever here at Blackburns and we appreciate it. A small cold front came through and we will see what it does to the Bass Fishing. It did not affect the temperate bass fishing this morning as Bink is really on them. He is dropping a spoon on their heads and catching a lot at 50-ft. down. I suspect live bait and crank bait trollers will start catching some also. I am catching mostly Kentucky Bass instead of Largemouth and most of them will not qualify for the Bass Cat tournament as all fish have to be 15-inches. Few of the ones that I am catching are over that. That rule may hurt the poundage for the tourny. I am just not finding any big largemouth and smallmouth like a few weeks earlier except in open water on shad and I do not fish that way. Dragging stuff is not my way of doing things. I am addicted to the fish hitting the lure and setting the hook. Anything else is anti-climatic for me but I am not a meat hunter. I have no idea what the poundage will be this weekend but my guess would be about 14-lbs/day. There are a lot of good fishermen out there but I do not think beating the bank will win this unless it gets very windy and some largemouth are on the windblown banks on crankbaits and I suspect the winner will not be from too far away from here. Liability seems to be a big driver in the rules for this tournamnet. They should be letting out a little more water from Norfork soon.