Scuba Steve with some of yesterday's catch. 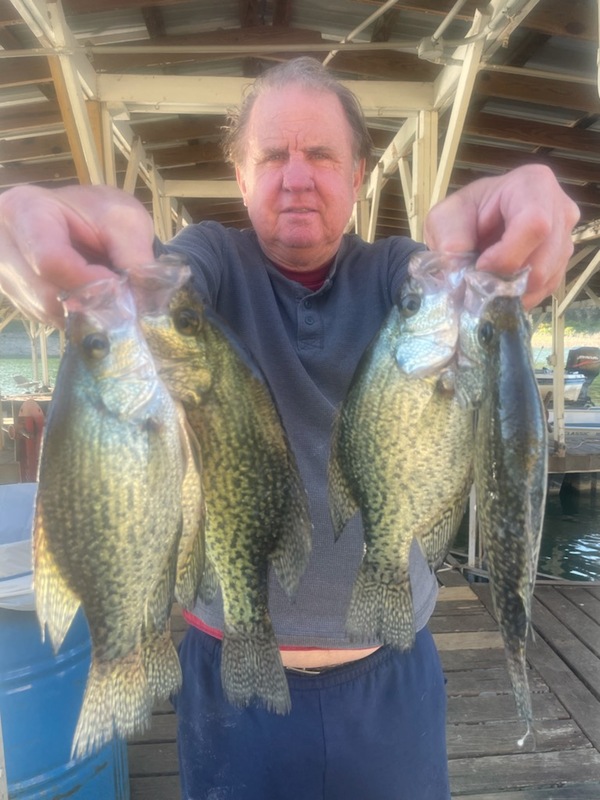 The lake level is 553.15 and has been within 1/2 inch of this level for nine days with one generator running for three hours. It would be nice if they would keep it stable in the spring for the spawn but fat chance of that. Hold and hope is the name and flood us out every year is the game. A lot could be done to prevent this if there was an effort and a reasonable plan. The lake surface water temperature was 73+ degrees when I went out yesterday and it was a bit windy as usual in the afternoon. It is calmer early before it warms and later in the evening after the heat of the day. The weather has been beautiful and the fishing is picking up a bit before the lake turn. We had divers in and they said the visibility was good in some places and poor in others. Poor mostly off mud banks and better off rocky ones. They found mostly crappie off brush and a few walleye but they were mostly short. No catfish. The theromocline was strill about 30-32 ft. with cold water lower than that. The lake turnover is almost always in October but the surface water temperature has to drop lower than the top of the thermocline for the layer to invert and we are not there yet. Crappie and bluegill fishing is the best now but trollers are catching some temperate bass as predicted but are dragging lures or live bait a long way to catch something. Some are near the bank at dark and before sunrise. Many species of fish are in open water on shad in the absence of numbers of large stripers competing for them.  If you are spooning brush in about 30-ft. of water it is hard to tell what you will catch. I am still catching small white bass accidently but very few larger ones. Blugill and crappie are on main lake brush with a few Kentucky bass. A few largemouth are on the bank but not many.  They are mostly in open water on shad and beating the bank is not producing much except smaller bass which are on minnows and fry just outside the dead buckbrush. It should get better for a few days before the turn if we do not get a big cold front. Bluegill like this full moon and they are biting and big ones too. It is nice to just be out there in the sunshine. Drop a small spoon in the brush and learn how to not get it hung up. Keep it straight up and down and do not drag it. If it is too windy change to a jig, go against the wind and use your trolling motor only as much as you need to to stay put. Turn off the spot lock. They wander around too much over the best areas. Crappie are easily spooked. If you cannot hold drift over the brush and use your trolling motor to go around and drift over again. Drop a marker buoy. If you see an unattended marker buoy just leave it alone. It belongs to someone and he will be back. Blackburns still especially welcomes Veterans and Police. You have a sanctuary and friends here.