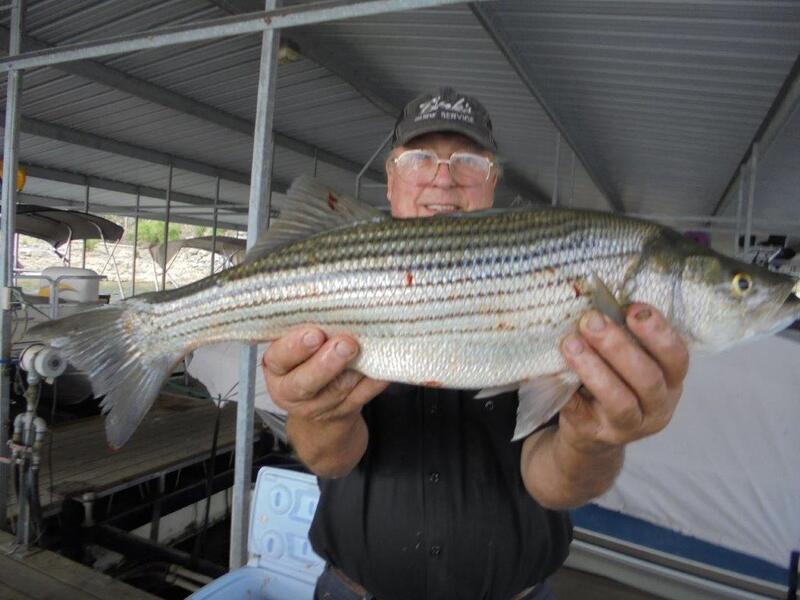 The lake level is 553.10 and is the same as it was at this time yesterday with 3-hours of one generator. They are doing a great job of holding the lake up as high as possible for as long as possible. That way if we get a big rain we will be nearly flooded again. For some unknown reason they like to keep it that way. It is at a good level now though. You can drive right to Blackburns Dock, launch there and step on, put your boat in a free boat stall and park your trailer in the trailer park. No need for two people or to go elsewhere to launch. Can't beat that and all at the best price on the lake. Some charge for boat stalls. We do not unless you bring the Queen Mary. Our one bedroom cabins are now $59/day and we are open all year. If the place that you normally stay closes for the winter you can stay here and resume paying more when they open back up. Bink found open water schooled fish yesterday as I predicted and did well. All temperate bass were together including some nice White Bass. That is a good sign. Some of the hybrids approached 6-lbs and the largest striper was nearly 10-lbs. Many were smaller. He had the boat in 65-ft. of water near a drop-off and the fish were suspended at 40-ft. I asked him if the schools that kept coming by were the same one or different ones and he thought they were different. He was using the 1/2 ounce white with red head spoon and vertical jigging. Some trollers should start catching some fish soon if they can find them. They are not easily found but he knows where the fall fish are historically located and where to start looking. I do not fish open water much but many do. It is a good way to catch some when other fishing slows, especially white bass. I wish there were more of them but at least some larger ones are starting to show. The ones that I am catching accidently are small. Bass fishing remains tough and the crappie have also slowed. Big bluegill are very good. For the last several days I have been going out for about 1-1/2 hours in the afternoon and catching about one Kentucky Bass, one or two crappie, four or five bluegill and an occassional walleye. Very few picture fish. It was more than double that a little over a week ago. Schooled fish are showing up around Robinson and Cranfield Islands but there are not a lot. Overall fishing is fair at best but good if you hit the right place at the right time which is usually about 7:15 AM. I am finding no top-water fish at this time. When I see schools of shad many of them have no big fish dogging them. Some do. Many bait fish continue to be on the banks part way backs in the creeks but the bass with them are hard to catch, at least for me now. It will get better. Much better. Surface water temperature is 76+ and will drop starting later this week end with highs to be in the 60's after the cold front. A big cold front. Lows are to be in the low 40's and we have not been anywhere close to that so far this year. Bring a coat. Blackburns has one cabin still open for Bass Cat. Give Debbie a call at 870-492-5115.