Craig De Hoet with a couple of yesterday's catch. He is from Woodward, Iowa. 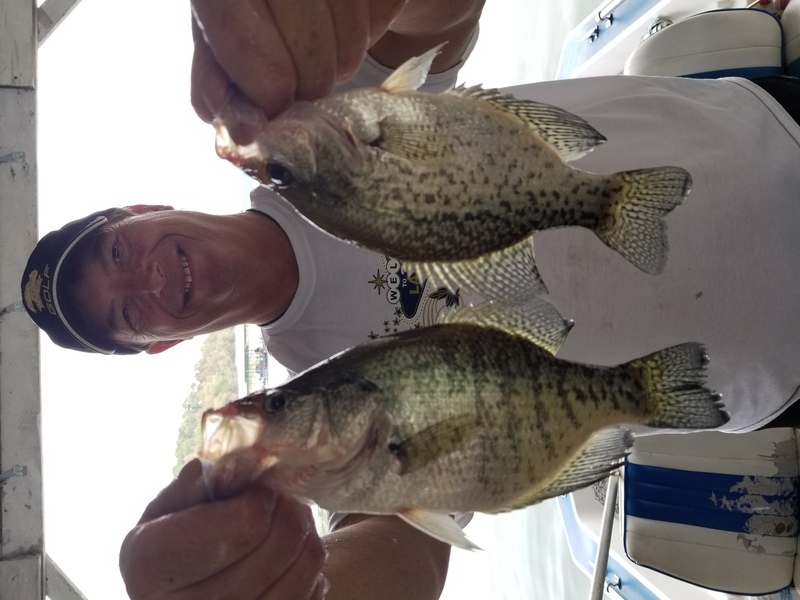 The lake level is 553.33 and has dropped 1-1/2 inches in the last 24-hours with one generator running about 1/2 the time. The surface water temperature is 78+ degrees and the main lake remains fairly clear and the creeks a little stained. Tne last of the Phoenix Bass Fishing League Regional Championship people left the resort this morning and we were happy to have them. Nice group. Most liked the lake but were disappointed in the fishing. A total of 34 lbs. and 15 ounces three day total won the top prize of $61,000 worth of stuff. I expected more fish but the overall fishing was not nearly as good as a week ago. I forgot to ask about the big bass but it is not a part of their results.  Crappie fishermen still caught fish but not nearly as many and said they were all caught early and quit early. Nothing later in the morning. The places where I had been catching fish were empty and I had to work for everything I caught which was not very many. The warm weather is still bringing out the pleasure boats, pontoon boats dragging children and jet skis on the weekends. They better hurry and get them winterized before the cold weather gets here.  I hope the storm does not hit here tonight but we could use some rain. It does not look good for Oklahoma and Northwest Atkansas but that could change. I will triple tie everything down and tighten up the dock cables and hope for the best. It is very nice out today and several are out fishing.