Caught fishing with Bink's Guide Service Yesterday on the spoon. The bass were hitting top-water early. 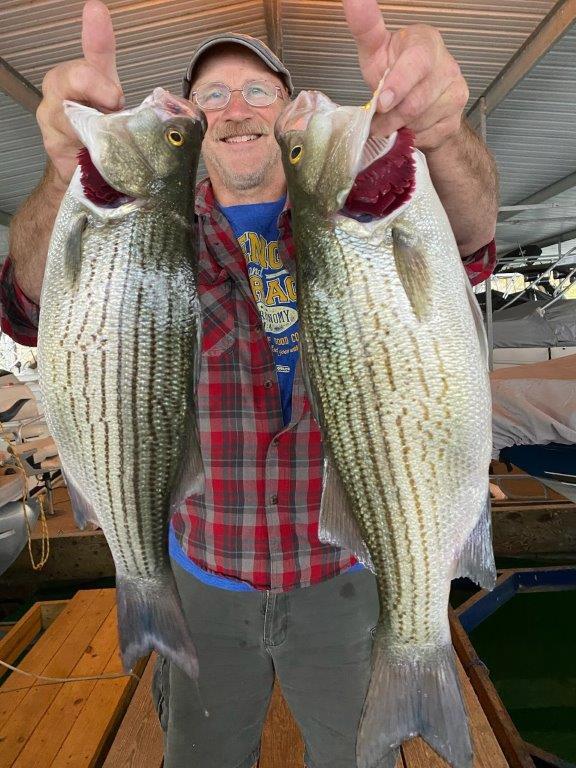 The lake level is 553.54 and has dropped 3/4 inch in the last 24-hours with one generator running for about 9-hours. We did receive just at one inch of badly needed rain in the last day and a half total and it really greened things up. The lawn turns black with the dry weather and then turns green again right after the rain. We seem to get some right when we need it but not enough. It is good to go into the winter with some ground water. It never warmed up yesterday and the lake surface water dropped to 77-degrees but it is to be a nice weekend with highs near 90. It was very foggy early this morning but it has burned off now and the weather is gone. A lot of fish will be caught by the Phoenix Bass Fishing League today with the overcast skies early. The top-water bite should have lasted for an extended period of time. I will go out after they quit and weigh in. The crappie were biting pretty well yesterday as were the bass. I was using a small jig and then moved out deeper than the brush and marked some fish suspended about 10-ft. up from the bottom in 50-ft. of water. I switched to the spoon and dropped it right on there heads and caught a 5-lb. hybrid striper. I released him and dropped it again and caught about a 20-inch striper. I do not fish for red meat fish anymore so I moved after releasing him. We need to let them grow. I do not try and catch any of them intentionally. They need to grow and make a comeback in Norfork. I was very pleased to catch my usual bass and crappie and put them under my dock. The school is getting big again after getting fished heavily. White Bass are not nearly what they have been in the past. They usually can be caught almost at will this time of year but I am seeing very few. They are the go to fish when nothing else is biting but not now. It they are not catching them up north near the border now they are just not there or in very high numbers. I am catching nice crappie and bass on brush in 30-32 ft. of water near the bottom every day.  Some big bass are being caught on steep banks when the worm drops off the ledge into deeper water near 40-ft. I am seeing no fish more than 40-ft. down. Come on down to Blackburns and we will not charge you too much. You can still get a one bedroom cabin for $59/day and a two bedroom for $77. Three and four bedrooms are priced accordingly. A free boat stall comes with your cabin and all have big covered porches where you can set out in the rain and out of the sun and rig your poles. There are no duplexes and every cabin has outdoor plugins. Why pay more? I got my covid booster shot yesterday and everyone here has been vaccinated. I certainly did not do it because the government told me to but because I though it was the best thing to do.