Scuba Steve with some of yearteday's catch released under the dock. 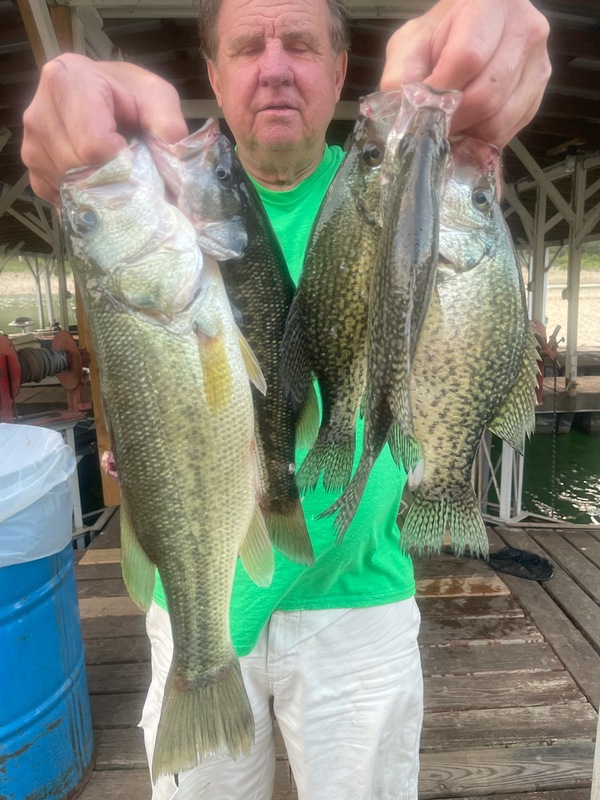 The lake level is 553.61 and has dropped 0.4 inches in the last 24-hours with about four hours of one generator running in the afternoon. They are making no effort to drop the lake and are missing a good chance. It is very cloudy with rain all around us but none yet. There is a good chance and we need it badly. If we get some we will see what it does to the fall foliage. The last two times more color was added but it is still mostly brown and yellow. I do not anticipate a very spectacular year but it is always beautiful here. It is to clear out and be a very warm and sunny weekend. We are loaded up with Phoenix Bass Fishermen. They are very tight lipped about fishing but sure do spend a lot of time polishing their boats. I guess if I spent that much I might also but not likely. I spent $2,500 for my Champion Boat ten years ago and forgot to polish it yet but it catches a lot of fish. It is not pretty but it can cook and rides nice also. You will see a lot of them on the lake next week for the Cystic. I went out yesterday in the late afternoon to check things out and tried a brush pile close to Blackburns. The fish were in 30-ft. brush near the bottom and I was using the Blue Ice Baby Shad on a 1/16th ounce jig head, white with red eye. I caught three nice crappie and three keeper bass and came in about an hour. One bass was tagged. All were released under my dock. Those Kentucky Bass are really fat and healthy. One largemouth was about three pouds. The wind finally layed about 5:PM. We will see what this low pressure coming in does to fishing. I expect not much. There are a lot of boats out there for October but I saw no boats pulling overweight children around on chaise lounges or jet skis. The warm weekend might bring some of them out though. The lake overall is in excelent condition and the surface water temperature was 78+ degrees and the water is stained just a bit but very clear near the bank.