Tom Kelly with a couple of yesterday's catch on a plastic worm on the bluffs near Float creek. All were released. Tom is an excellent fisherman and a conservationalist. 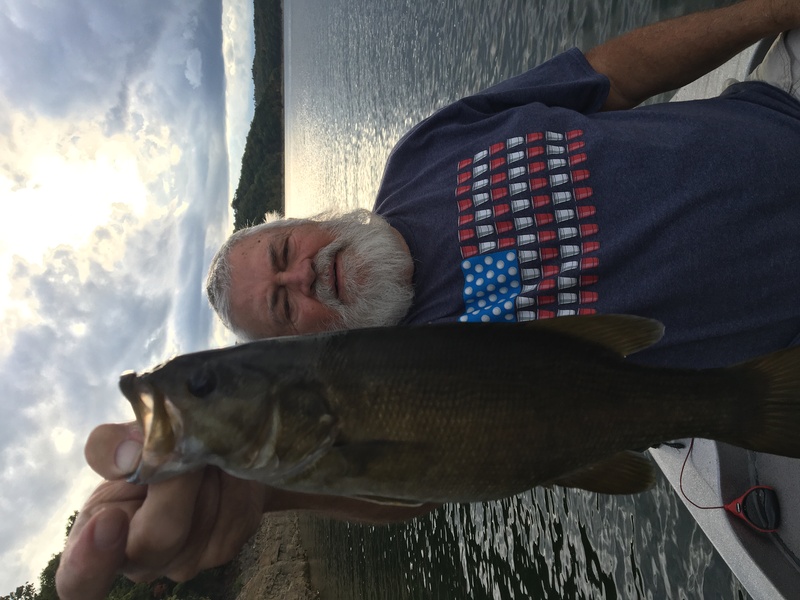 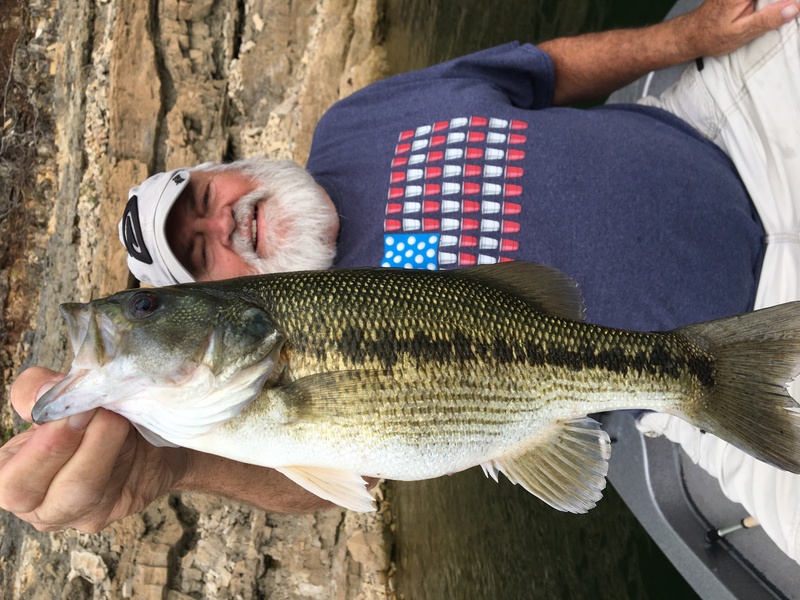 The lake level is 553.56 and has dropped 1.2 inches in the last 24-hours with nine hours of one generator running. It has remained cloudy again but still not much rain as of yet. We are still very dry. The leaves are falling much more rapidly now from the walnut, maple and oak trees. It is earlier than usual. No color except for yellow and brown. It could change but there is not much chance of it being very spectacular. The hillsides around the lake are changing also but not much on the roadsides.The sumac is not even turning red. It is just too dry. We received just over an inch of rain for the entire month of September. The fishing remains mostly the same except for the smallmouth and bigger largemouth are showing up and it is just in time for the October fishing tournaments. I hope they do well. I like them in the fall after all of the spawn is over. It is much better than in the spring even though they release all of their fish unprotected nests do not last very long with the abundance of bluegill in this lake. The surface water temperature is still 79 in the afternoons and the water remains stained a bit in both the main lake and creeks and is a good color for fishing. I saw some top-water fish yesterday morning and threw a baby spook at them. They were mostly bass but a few very small stripers were with them. About 1in 4 bass were keepers and none of the stripers. They were stockers and about 8-inches long but I was glad to see them. I have not seen a White Bass in several weeks. Usually I get them in early October just outside the brush suspended about 10-ft. from the bottom in 30-ft. of water. This year nothing. Some of the striper fishermen that cannot catch anything are now turning into crappie fishermen. We will see what happens in Novenber when they usually start to show up again. If there are no stripers feeding on shad on the bank after dark in the full moon in November again it is not a good sign. I had hoped some were just hiding, but if they are they are doing it well. I am seeing none of them on shad in open water except the very small ones. I was catching 5-6 pounders accidently but not now.  Bass, crappie, catfish and bluegill remain the best bite. The Kentucky bass population is excellent and they are with the crappie on brush. They are in there for eating and the largemouth and smallmouth are in there for releasing. I went to the Norfork Lake Master Plan public workshop yesterday at the college. It was very well organized and informative. They had three proposals with one that they recommended. The top one was much more drastic and was presented as an alternative to the middle one which was more realistic. The third one was to keep it as it is. There was nothing bad about any of them concerning anything except how the different parts of the lake shore is managed. It changes how different parts of the shoreline are categorized which really reflect how they are actually now. Some of the assumptions made in 1980 which was when the last plan was enacted did not come true. Some areas developed more than others. Most of the changes just made for more wildlife areas while reducing high use areas. Nothing in there was about docks or lake level management. As far as I am concerned there was nothing to worry about in this proposal. It was done professionally but was definitely slanted towards the middle proposal which I also think was the best. Everyone knows that I am not a fan of how the lake level is currently managed but this had nothing to do with this. The people were very professional, courteous and informed. I am glad I went. We have one opening for Bass Cat later this month and are currently full here at Blackburns. We like that. Thank you. Come on down. We will not charge you too much.  No, we are not for sale but about everybody else is.