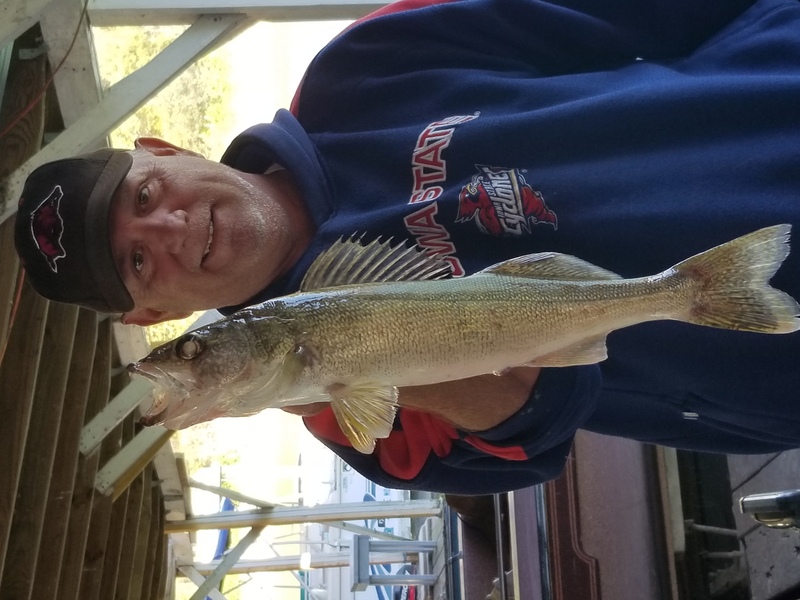 The lake level is 554.09 and has dropped a little less than an inch  with less generation. The White River at Newport is 5+ feet and still dropping. The Southwest Power is doing a better job of holding the lake level up than the Corps but they are both government agencies so you do not expect much and do not gey much. It is a good thing we have been very dry or we would not be where we are now even though it took all summer to get here. If they do not change the way things are managed we can expect the same thing over and over. They like to keep us one big rain away from getting high. It was a beautiful day with ambient temperatures near 90 and sunny but just a little windy when I went out yeaterday.There were not nearly as many boats out there as the day before. Some people watch football, I fish. I went close to Blackburns Dock on a brush pile and went crappie fishing. I used the 1/16th ounce jig head, white with a red eye, and a Bobby Garland Blue Ice Baby Shad. I do not like to spoon in the wind It would be ok if Norfork was not a flooded river with vatiable swirling winds. If it was steady from the same direction you could just go against it with your trolling motor and stay straight up and down.  As the river changes direction so does the wind. It has to blow somewhere. That is why you do not see very many sail boats out there. When this happens just switch from a spoon to a jig. It does not hang up nearly as bad. The crappie and bluegill were biting well and I also caught a decent Kentucky Bass and a channel catfish. I have not seen so many catfish caught on lures in quite some time. They are right in the brush near the bottom. The surface water temperature was again 80 degrees in the late afternoon. Leaves continue to fall and we are not into October yet. It is to stay warm for a couple of days and the a good chance of rain on Wednesday and Thursday. We can certainly use it. The lake needs to drop at least six more feet before spring comes. The water is stained a little more than a couple of days ago but is an excellent color for fishing. It looks to be a very busy October for Norfork with all of the fishing tournaments. Should be fun to see what happens. I have not seen any striper kill so far as predicted. Either they stayed in the shallower bubble of 30-32 feet where the oxygen is or they are gone. Some in the 5-6 lb. range are being caught with an occassional one approaching 10-lbs. I sure wish there were more and people would quit killing the ones that are left until they make a comeback. I thought the White Bass were making a comeback but I am not seeing hardly any and usually can catch them almost at will this tme of year.  They should move to the mouth of creeks on shad if they start to show up. Between Mallard Point and Blackburns Creek is a good place to look for them.