Chris Crosson and Benito Montez (AKA) Mr. walleye show off some nice ones caught fishing with Bink's Guide service. 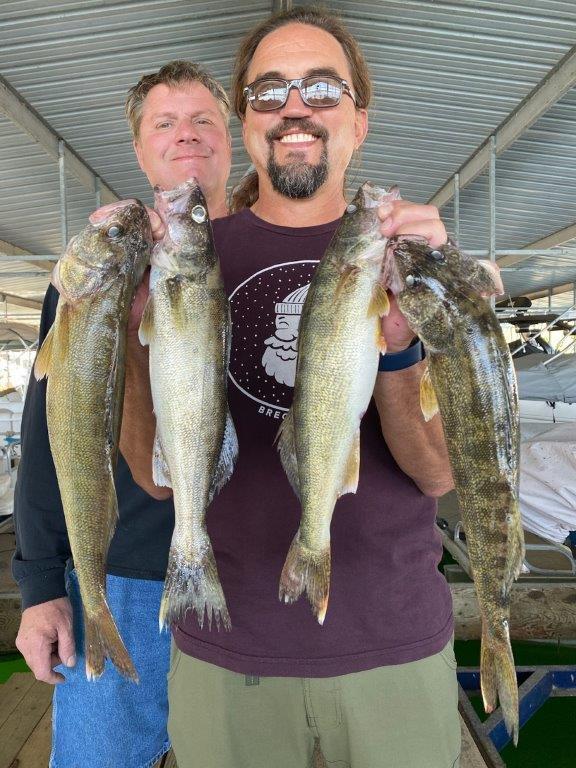 The lake level is 554.19 and has dropped one inch in the last 24-hours with 1-1/3 generators running for about eight hours in the afternoon. The White River at Newport is at 5+ feet and still dropping. The surface water tmeperature was 80-degrees when I went out yesterday afternoon. There were a lot of boats out there enjoying the beautiful weather. The wind was light and the sun was shining. I checked out a brush pile near Blackburns that was holding fish and stayed there for one hour and came back in. I caught six nice crappie and four big bluegill. They were biting the 1/16th ounce jig casting it past the 32-ft. brush and letting it sink into it. I fished from 2PM to 3PM. I had been catching several 2-pound Kentucky Bass there but not today. The divers reported the thermocline is still at 32-feet and probably will not be driven down any more despite the very warm weather starting today for several days. The cooler nights are holding the water at close to the same temperature despite the warm afternoons. The sun is only up for about 1/2 the time now and will get less and less until the lake surface water temperature drops to just below 70-degrees and the turnover will begin. Time change is November 7th and after that is almost always good fishing.  The turn some times happens quickly but mostly over an extended time until it is complete. You can tell when it is finished as the water temperature will be uniform from the surface to down where the thermocline was located. Typically early to mid 30's feet. You cannot tell a thermocline with a fish locator accurately. The line most people see is just where the light stops penetrating the water. The oxygen will also be evenly dispersed to that level and the water is basically homogenous. In the years where the water temperature drops slowly in late September to October this can happen over a couple of weeks but a severe cold front accompanied by winds can drop it more quickly. You can count on it happening sometime in October. You can either scuba dive, use a fish and temp or a camera with a temperature probe to tell exactly. Norfork Lake is Monomictic meaning it only turns once a year. Other lakes do it also in the spring. Here the water warms in the spring until the thermocline forms sometime in may at a little less than 20-ft. That is an excelllent time to fish because there are a lot of fish at that depth. Fall is hard to predict and that is why I always say November is an excellent time to fish Norfork also. There are to be several big fishing tournaments in October this year and it will be interesting to see how the bass fishermen do. It could be challenging later in the month if a windy cold front comes through. I will be out there if at all possible every day. The fall foliage is still ahead of normal and some trees are not turning color and just going to brown on the hillsides. It may be caused by the dry weather but I am not sure. Fishermen coming to Norfork are disappointed in the numbers of big stripers but are pleasantly surprised at the walleye, crappie and bass fishing. Catfishing and bluegill are not bad either. Come on down to Blackburns. We will not charge you too much. Our big pool is still open.  We have individual cabins with no duplexes starting at $59/day.