Mike Eakle with some of yesterday's catch. Released under the dock. 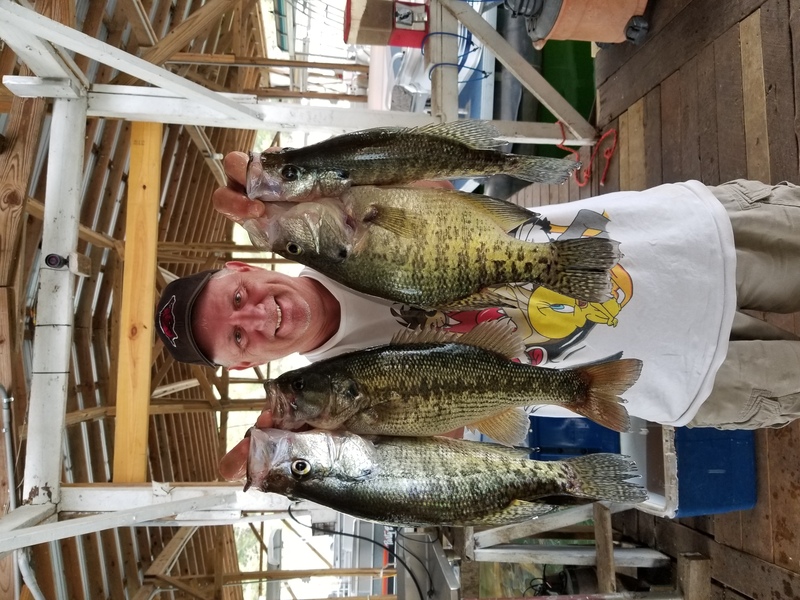 The lake level is 554.70 and has actually risen in the last 24-hours just a bit with very little generation. They are holding the White River at Newport to just over 7-ft. for some reason. I do not understand the reluctance to drop the lake at least to the high 540's but it is there for sure. The rule says regulate the level at Newport to 12-ft. I do not agree with this rule but they will not even do that. We received a little over one inch of badly needed rain last night and this morning here at Blackburns, with varying amounts in the surrounding areas. South of us got very little. There was about 1/2 inch in town. It is cool out now with a high in the 60's and the predicted cold front on it's way. It is to be in the 40's tomorrow morning and this is what a lot of people wanted. Not me. It is to warm back up to the 80's later in the week. Our normal high is 80 and low is 60. I will see what this is doing to the lake condition when I go out later. People just keep coming and it is very busy here at Blackburns with people taking advantage of the best prices on both cabins and boat rentals in the area. We have mostly repeat customers and do not want to charge them too much. The bass, crappie and bluegill are still the best bite now with a few keeper walleye and catfish being caught. Trollers are getting a few small stripers and hybrids but are dragging bait for miles to get them. I will let you know the conditions after I fish today. We have a group of good divers out there and will also get a report from them These cloudy skies will not help their visibility today any but it should get better later. The lake is at a good level now and is in great condition for fishing after this cold front is gone for a while. A full moon and cold front do not do much good at the same time but we will see what happens. I like a challenge.