Scuba Steve with some of yesterday's catch. Released under the dock. 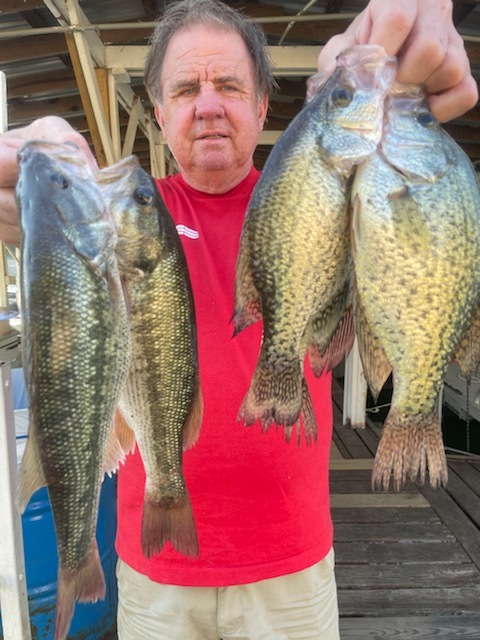 The lake level is 555 even and has dropped 4-inches in the last 24-hours with 1-1/3 generators running continuously. The White River at Newport is still at 7-ft. so there is not any need to slow down. I would like it to get to 547-48 and hold it there until spring. That would give us about 11-12 feet of surge capacity going into the spring rains. We always seem to get a big one and it is much better to be at 547 than 555 when it comes. The lake surface water temperature was 83+ yesterday afternoon when I went out fishing and it was a little breezy so I used the 3/8th ounce spoon to help keep it straight down rather than going back in a creek to get out of it. I actually like the 1/4 ounce better with 4-lb test clear line.  I am catching many more fish on the main lake than in the creeks now but that is not always the case. Bass, crappie and catfish are all in 30-34 ft. of water either on top of, in or around brush along with some walleye. A few smaller stripers and a hybrid or two are a little deeper in front of the brush on shad. Most schools of shad have no predator fish on them.  Several fish remain down about 30+ feet no matter how deep it is. Trollers should be able to drag either a crank bait or live bait at that depth and catch some. The brush that was in 30+ ft. of water and is now 25-ft. are not holding very many fish after the drop. Most will stay at the current depth until the lake turns over later in October and the water temperature and oxygen becomes homogenous down to about 30-ft. and the fish have no other reasons to be anywhere special except for cover and food. This will not slow fishing down much except that they are more scattered. The last few years the turn has been gradual and not drastic like northern shallow lakes where they get muddy and junk comes to the surface. We just see an inversion of the thermocline. The fall foliage is starting to fall with walnuts and other hardwood decidous trees starting to lose their leaves. My maple has no color. It is very dry. Sometimes dry weather has good color and sometimes not. We will see. The usual peak for Norfork Lake, Northern Arkansas and the Ozark Mountain Region is the last of October but I have given up predicting how good it will be. It is almost always a nice ride to take a country road drive at that time. Blackburns Resort is your fall foliage headquarters for the area. We will help you with some good driving tours. Come on down. We will not charge you too much. Rent a boat and cruise the lake is often the best way to see color and enjoy the Ozark's fall.