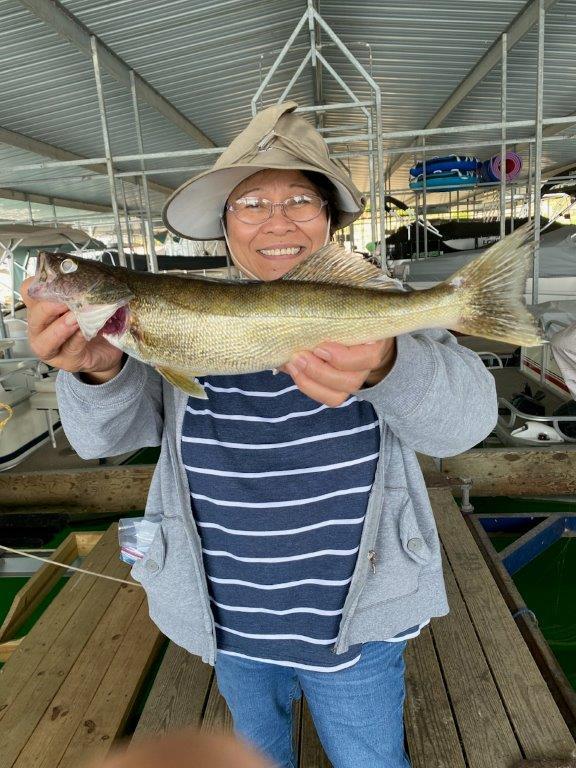 The lake level is 561.60 and has dropped 2-inches in the last 24-hours with reduced generation. It looks like we will get to below 560 for the holiday and the launches and parking will be much better by then but the level is still too high. The surface water temperature was 86 degrees when I went out fishing for about an hour yesterday early afternoon. I figure if I can catch fish in August in the heat of the day I can catch them most anytime. I caught four nice crappie and stopped fishing for them because they were coming out of over 30-ft. of water and would not release. My friend in town wanted some so he now has them. I moved to shallower water and caught two nice bass and a walleye and came in. All fish were caught on the 1/4 ounce white spoon. I did try the crappie jig and slip float with a live minnow and caught nothing.  The rest of the fish were released under the dock. Not much has changed as far as fishing goes but I had expected striper fishing to get better with the full moon approaching but have not seen very many caught. Catfishing has been a little disappointing this year but will get better as the moon wanes and the lake drops slower. They always slow down generation when the power pool is approached so they do not lose some of the control to the power administration. They are both government so it really does not matter much. That level is 555.75 and has changed in the last few years and nobody knows why or how but it has gone up from 552. 555.75 is a good level but is only one big rain from getting too high again. They seem to like to keep it that way for another unknown reason. I would like to know how the % of flood storage is now calculated but again nobody seems to know and there is no accountability. The boat traffic has slowed way down on the lake now that school has started but a very busy Labor day is expected. Come on down to Blackburns and we will not charge you too much and we especially welcome Veterans and Police. Peace and quiet and the fall fishing season starts September 7th as well as Blackburns off-season rates where you will be able to get a 1-bedroom cabin for $59/day with a free boat stall. Not bad.