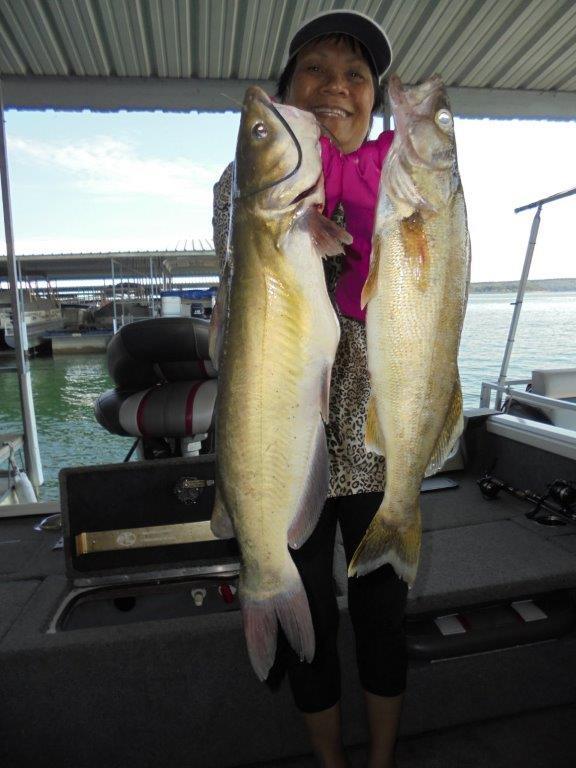 The lake level is 562.70 and has dropped about two inches in the last 24-hours with several hours less generation. The cooler weather has dropped the surface water temperature a couple of degrees to about 84 and the water is still clear. Spooning is the best now with walleye, bass and small stripers in the 6-7 pound range being caught still in 30+ feet of water near or in brush. Not much has changesd except the overall fishing is still just fair but some nice ones are being caught every day but not a lot. The early morning bite is the best but some crappie, bass and bluegill are being caught in the evening in front of brush near the bank on soft plastics with no or very light weights. There are a lot of baitfish there and the gamefish are moving to them as the sun goes down and the shallow surface water cools a bit. After the early morning bite the fish move back into the cooler deeper water as the suns comes up. We have received 35.35 inches of totasl moisture so far this year with an average of 45.30 for the year. They certainly cannot blame heavy rain for keeping the lake levels up as high as they have for so long. We received about three inces of that last week and it all sunk in as we were so dry and could use some more. The grass has really greened up after the last rain and Blackburns big yard looks beautiful again. We still have a couple of cabins open for the Labor Day and a couple of pontoons for rent. We had a group cancel yesterday. Call Debbie at 870-492-5115 as they will fill quickly. No sense paying more elsewhere unless you just want to or have too much money.