Scuba Steve with some of the best ones caught yesterday. All were released under the dock. 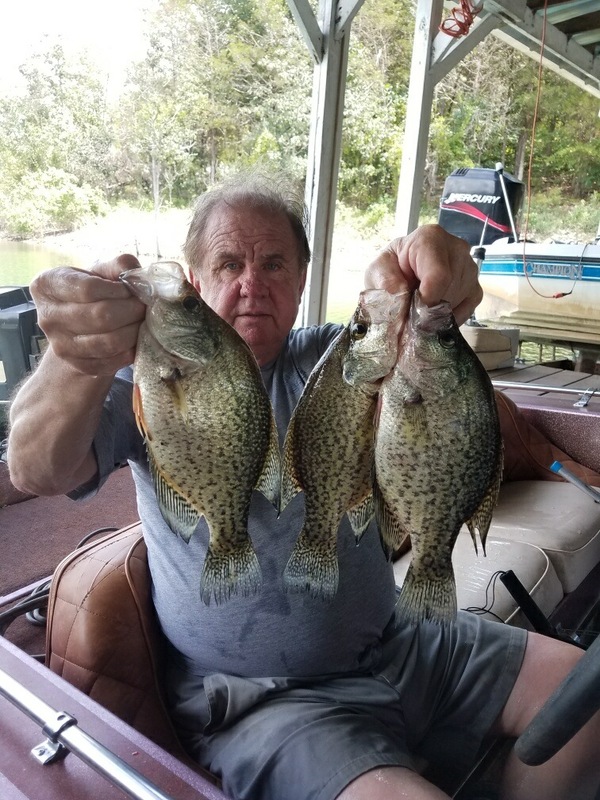 The lake level is 563.20 and has dropped 1-3/4 inches in the last 24-hours with about 18-hours of generation. I do not know what to report about last night's rainfall. The weather watcher on Mallard Point reported 0.8 inches. KTLO radio reported over 2-inches and Tom Kelly reported 3-inches at Rolling Meadows about three miles away.  My rain gauge has been accurate for several years and I dumped it yesterday morning and had 4-inches in it this morning. That is all I can say. The creeks did not run but the road was partially washed out to the dock. All I know for sure is that it was a blessing and did not hurt anything. We needed it so badly but it rarely happens in August. I had to check out a boat yesterday about noon so I took two fishing poles with me. One had a Bobby Garland Blue Ice on a 1/16th ounce jig head and the other had a 3/8th ounce Bink's Spoon white with red eye and a black dot on the back. I went to a close brush pile known to hold crappie and cast the jig for about 20-minutes with no takers. The water was 28-30 ft. deep and the brush came to about 10-15 feet from the surface. We put several trees in there last winter from my property which borders the corps property. I then switched to the spoon right in the brush near the bottom and caught three nice crappie and two bass and came in after a little over an hour. There was nothing dramatic and the fish were not in a frenzy and my pole was not bent double and I did not lose any big ones but caught some nice ones.  We are so busy here at Blackburns that I cannot go fishing for very long and still run the business properly even though I have the best employees ever.  My time will come later after things slow down, if they do. We have been very busy since March with people taking advantage of the best prices on both cabins and boat rental in the area. Come on down. We will not charge you too much and especially welcome Veterans and Police. I have had a few encounters with the police but do not blame them and am smart enought not to resist arrest and pull a gun on them. Things work out better then for everybody.