Mike Eakle with some of yesterday's catch fishing Blackburns Brush piles. We work hard to put them in and they are paying off now. 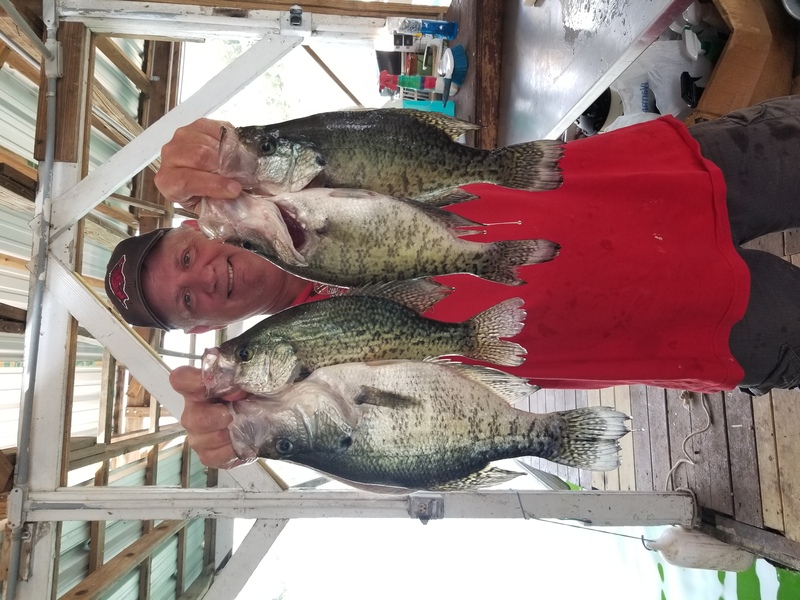 The lake level is 564.81 and has dropped a little over 3-inches in the last 24-hours with the same generation. The surface water temperature is 86 degrees and the water is clear for this time of year. There is still quite a bit of boat traffic out there especially on weekends but the number of fishermen is increasing. Most of the fishing is also about the same with one exception. The crappie are schooling more and have moved to the brush piles with the dropping water and are in a little less than 30-ft. of water. 1/4 ounce spoons are working the best but Bobby Garland jigs and slip floats with minnows are also catching some. They are in their normal places but have moved in a little earlier than before. September looks to be good crappie fishing but it is pretty good right now. Bluegill fishing remains very good as is the size. Most crappie are over 10-inches but not very many big ones yet. There will be. The lake turnover in October does not affect crappie fishing much and it gets better as the water cools. We typically get a little bumb in the lake level in November, which is our rainiest month of the year and they keep the White River at Newport still at 12-feet. Winter is the best time to catch the giant crappie and I only fish brush piles for them and bass at that time. Thanksgiving is usually prime time for both. Main lake points and just around the points in and next to brush in a little less than 30-ft. are all holding fish. It is very dry and we need some rain badly. The weather is to get well into the 90's this week but typically cools off after the middle of August. We will see. We need the lake to drop five more feet to get back to a good level but that does not allow for any rain. A level of about 548 going into the spring would be nice but fat chance of that. They like about 555 so we are just one big rain from getting right back to where we were. Just holding water is not flood control but nobody seems to care and are getting used to mismanagement. it is a good thing we have been dryer than normal this summer or it would take them until winter to just get it down a bit. It has not hurt the fish population any though and for most species it is as high as I have ever seen it. Blackburns still has the best prices on both cabins and boat rentals so come on down. We will not charge you too much. Veterans and Police are especially welcome.