Caught on the Bink's Spoon yesterday. 1/2 ounce Many Shad 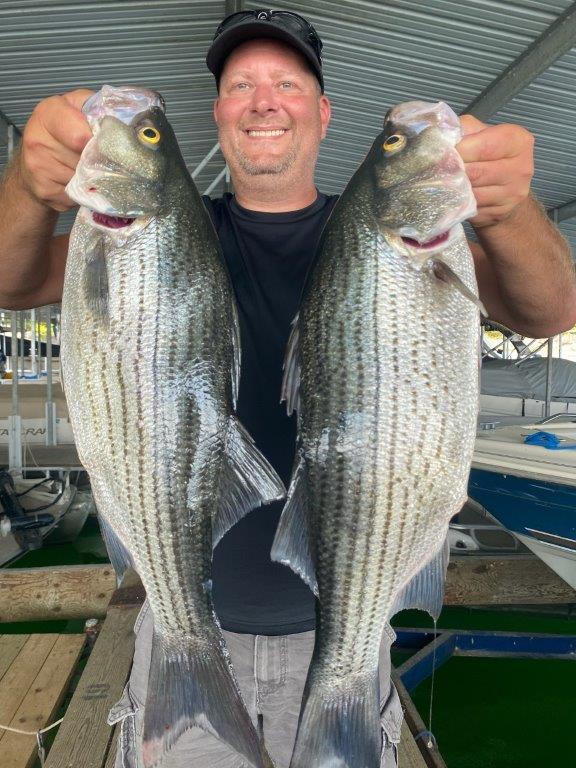 The lake level is 567.87 and has dropped 1-1/2 inches in the last 24-hours with gneration about 1/2 the time. It has taken over six days to drop the lake the last foot even with the dry conditions. They are doing a great job of holding the lake level up and now have the White River at Newport below 12-ft. to continue to do so. We are still over 14-ft. above power pool which is 553.75. It ised to be 552 before the minimum flow law took away 1.75 ft. of flood capacity for the put and take trout on the rivers to help economic activity at the expense of flood control.  It needs to get to below 560 to get parking, launching, swimming camping and marina access back to normal. At this rate it will take until the middle of september to do so if it does not rain much. The lake surface water temperature is rising with the hot weather and is now between 87 and 88 degrees. It should hit 90 by the end of next week. It always does in early August. Some fish are continuing to bite with the late evening bite for bass on worms and saltcraws and the early morning for walleye, bass and white bass the best on spoons. A few hybrids and stripers are coming in but not a lot. Trollers are not reporting which means they are not catching much. If they were there would be pictures of dock floors full of dead stripers. Blackburns has several good fishermen in now but most are catch and release. Catfishing is slow but will pick back up after the moon wanes. Bluegill fishing is good and big ones too. Most crappie coming in are small with a lot of throw backs. The lake is in excellent condition but still high. It is a typical late july but the water is much clearer than in previous several years since they started holding the level up so high for so long in the name of flood control when it is not flooding.