Caught fishing with Bink's Guide Service. That is one good picture. 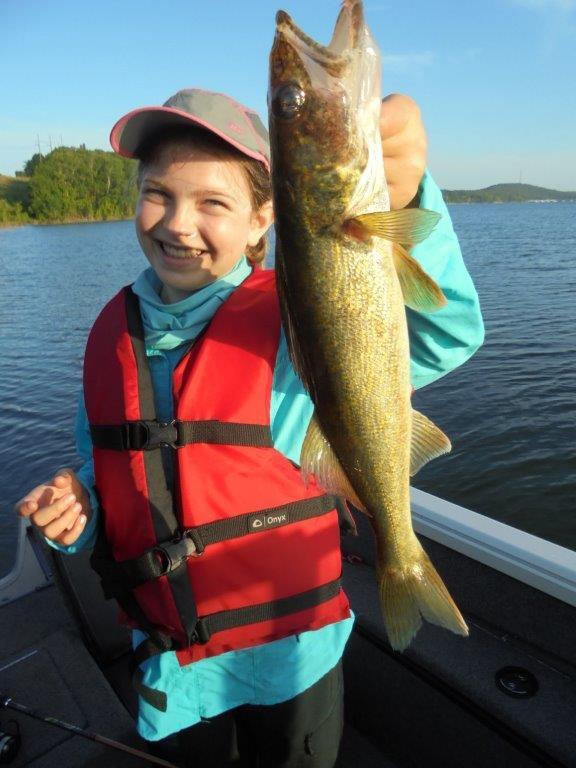 The lake level is 569.05 and has dropped 1-3/4 inch in the last 24-hours with generation about 80% of the time. We received about 3/4 inch yesterday morning about 10:30 AM and it rained hard for several minutes and then quit. It was badly needed and really greened things up again. It all sank in and settled a lot of dust. We are below average rainfall again so far in July. The lake is in very good condition and the main lake is clear with the creeks stained a little but also clear near the shore. The surface water temperature remains between 85 and 86 degrees. More wood is showing up everyday near the bank with the dropping water level and people are still hitting stuff with their boats going too close to shore. The floating debris is almost gone. When dragging those overweight children around on chaise lounges it is best to stay in the main channel. I guest skiing is a lost art and requires too much effort but you do not see much of it anymore. Fishing remains the same and is normal for the middle of July. Walleye and bass fishing is the best with some stripers being caught and killed fishing deep. They are still getting smaller and smaller. The striper guides are going to have to learn how to catch bass, walleye and crappie or go out of business if they keep this up or try to convince people that a 6-9 pound striper is big.The high water and low oxygen levels in August and early September are not helping things any either. Typically we get the hottest time of the year the last week of July and first week in August when the ambient temperatures get to near 100 degrees and the lake surface water gets to 90 degrees. So far we have not been near that. The Norfork Lake Striper Club has a dissolved ozygen meter and give periodic reports on levels. It is good information and lets us know what to expect as far as striper kills are concerned. Some places near the dam go to zero or nearly so and the fish there move north, go dormant,die or all of the above. It is not a pretty sight to see them floating. Some of this is also caused by fishermen trying to release small ones after being brought up out of deep water. They may look ok and swim away but will die later due to the stress of being caught and the water temperature near the surface. The answer is to not fish in deep water. I do not know the % that float or sink but I suspect the sinking ones are a lot more. The Game and Fish did resume normal stockings this year after being unable to last year due to Covid. It will take a few years to get the big ones back even if they would quit flooding the lake every year and holding it up all summer. I wish they would change the legal limit to two stripers and hybrids total. What is legal is one thing and what is good conservation is another. All of the species of fish that reproduce in Norfork Lake are doing well except the White Bass and they are starting to come back after the kill-off a couple of years ago.  They used to be plentiful and were the go to fish when people could not catch anything else but not anymore. They will be back though. A lot of things have changed the last several years with the lake level management refusing to adapt to the changes. They still think it is 1960 but that is what happens when you let governmnet run things. They move slowly. Very slowly. The exception here are the biologists at Arkansas game and Fish, especially local, that care a lot about the lakes and fisheries and work hard to make them the best they can. I really appreciate them.