Caught yesterday fishing with Bink. There are still a few left but people just keep killing those small ones and bragging about it. 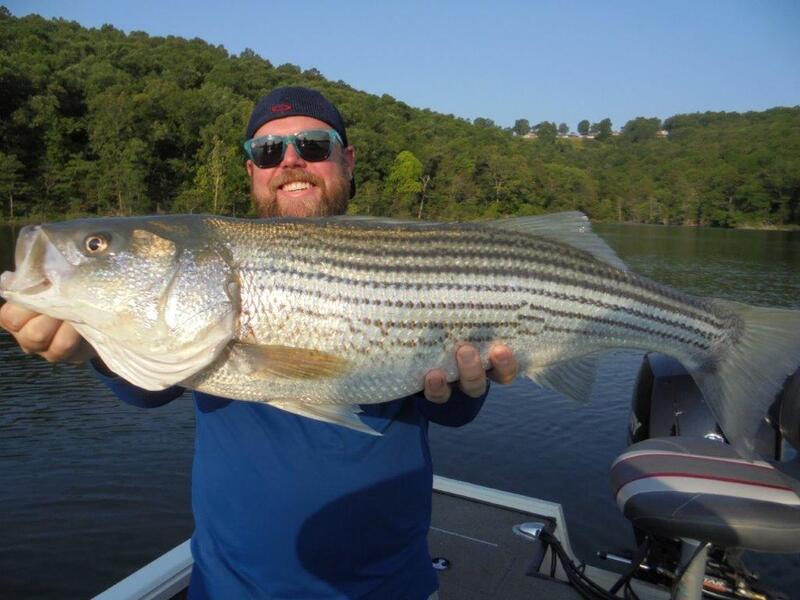 The lake level is 571.03 and has dropped a little less than 2-inches in the last 24-hours with generation about 60% of the time. They are holding the White River at Newport to below 12-feet when it should be at 14-ft. Minor flood stage there is 23-ft and they are protecting nobody from anything but are doing a great job of holding the area lakes up as high as possible for as long as possible. At this rate we will be at 561 or better by Labor Day and still be 7-8 feet above power pool by then if we do not get much more rain. We have been fortunate to have had below normal rainfall for several weeks and it is getting dry and dusty. Bull Shoals had a drowning and Norfork had a bad wakeboard accident yesterday so be carefull and do not go out after dark and check out the area before you start dragging people with your boats. There is still some debris but not a lot. The water is clearing quickly after the holiday churning and is in good condition with a surface temperature of about 85-degrees. The weather is to get into the low 90's today and mid 90's later this week. Typical July. Normal high is 89 and low is 67. The lake traffic is still right up there and most of the better resorts are full. At least the ones with docks and swimming pools.  The town traffic is very busy and you can avoid most of it by staying home from between a little after 4:PM and 5:30 Pm. They are peddling those little cars very fast along 62 and the bypass during those times just like the big cities. It certainly is not like it used to be. I do not think we need to recruit any more tourists or more people to move here. I used to know almost everybody in town and now can go into Walmart and not see anybody I know. What a change. Highway 62-412 was a 2-lane road by Blackburns corner and I hardly had to stop for oncoming traffic before pulling out. Now it is five lanes and sometimes requires a long wait. The was no bypass and all traffic, including big trucks, had to go through town. Traffic is getting bad despite all of these so called improvements. My property tax has increased three fold and sales tax has increased dramatically. I guess that is progress. I am not sure I like progress very much but there is no better place to go. Things will get better come late fall and winter when I can fish every day. That makes things better. A lot better.  At least for me.