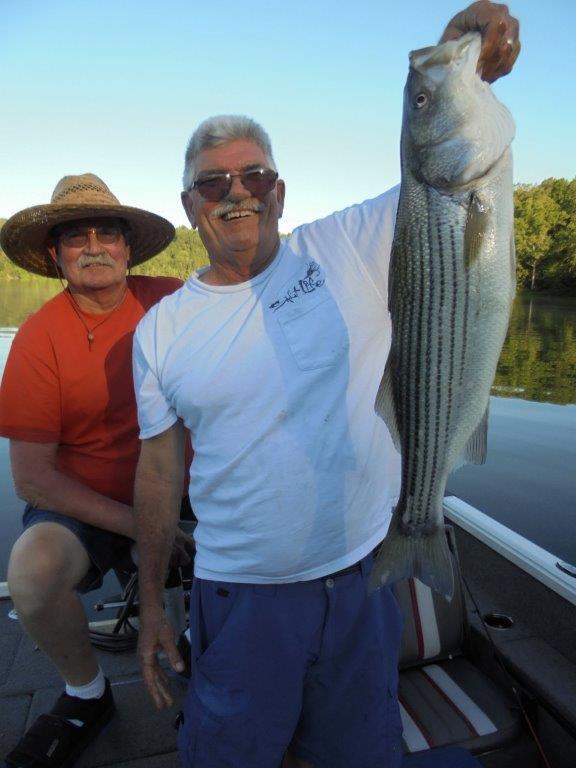 The lake level is 573.04 and is rising slowly with not much generation. All of the other area lakes are dropping slowly. They now have the White River at Newport at 12-feet and are stubbornly holding up Norfork. These boys know no other policy than hold and hope. It is getting very dry here and I have to irrigate. Take the plug out boys you have done enough damage. The lake surface water temperature is in the mid 80's and the thermocline is dropping to the mid 20's with cold water under that. A lot of fish are at or near that depth and near the old shore line. The lake is about 20-ft. high.  Some crappie and bluegill are being caught but stripers and bass are the best bite early on top-water. They start early and quit early. This bite will diminish as the fish go deeper in openwater. Some walleye are at the thermocline near the bottom on main lake points and some are with the shad. It seems more walleye are on shad than before with the absence of the big stripers. Same goes for crappie. The fish change when the striper numbers are lower. Also there are not nearly as many shad due to the kill this winter. More died than I originally thought but they will come back fast as the threadfin spawn multiple times a year. There are bass fry everywhere and they have a lot of cover to survive. Bass numbers and size continue to increase on Norfork. There are more 5-6 pound bass showing up than I have ever seen. A lot of crappie were caught this spring but there are plenty more. People trolling for stripers caught several of them accidently when the lake was not so high. They are scattered and not easily caught now. Some very nice catfish and bluegill are being caught back in the creeks and off docks. A lot of people are getting sunburns out there so take precautions. It is July weather in the middle of June. Come on down to Blackburns. We will not charge you too much. We have plenty of parking and covered porches are very important now. Be sure you ask if places have a boat dock and pool. Many do not.