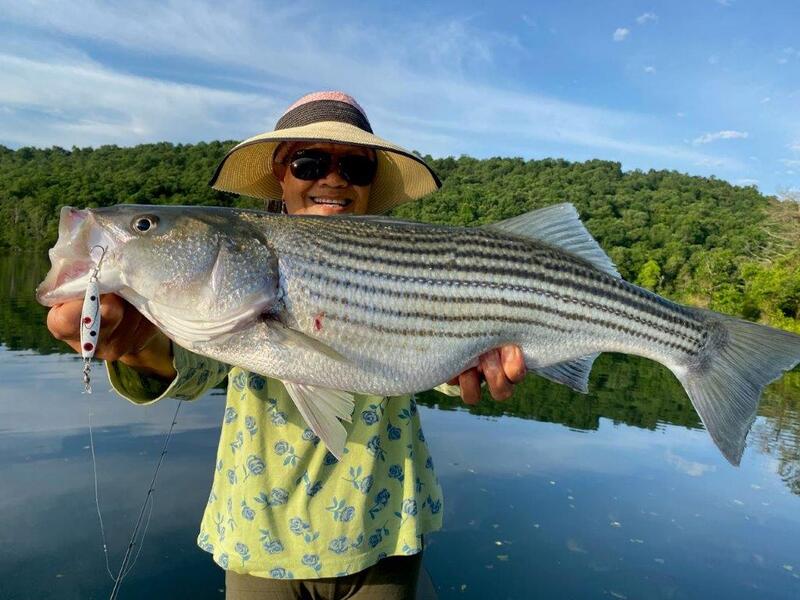 The lake level is 572.84 and has risen about an inch in the last 24-hours with very little generation. They are doing a great job of holding all the area lakes up as high as possible for as long as poissible and increasing the chances of one big rain in the watershed in Missouri taking them over the dams. Good plan. We received 1.5 inches of rain Friday evening in a very short time with a storm with wind. The power was out for a period but is restored now. Several big trees were down in the area around here but fortunately none here at Blackburns. Our beautiful valley is pretty well protected but we do have big trees and it is still a concern. The higher elevations got it the worst.  Local rains do not have much of an effect on lake levels. We have now received just over 2-inches in the month of June. I was just about to start irrigating but no need now. It was getting dry. I have not had time to go fishing but Bink is catching some nice stripers both on top-water and deeper on spoons after they go down. People are also catching bass and crappie off the dock and in Blackburns creek and around Cranfield Island. There is a lot of cleanup going on in the area and people are busy. No shortage of firewood. It is amazing how some people are not concerned about anything except them selves and being inconvenienced. I am just thankfull that I know of nobody being injured in the storm and count my blessings. The electric company worked hard restoring power and called in help from other co-ops. Maybe they should have called in a little more but it was hard to access the damage until Saturday morning and you know how hard it is to get hold of a real person on Saturday morning around here.  Everything is fine.