Mike Eakle with a coupld of nice ones yesterday. 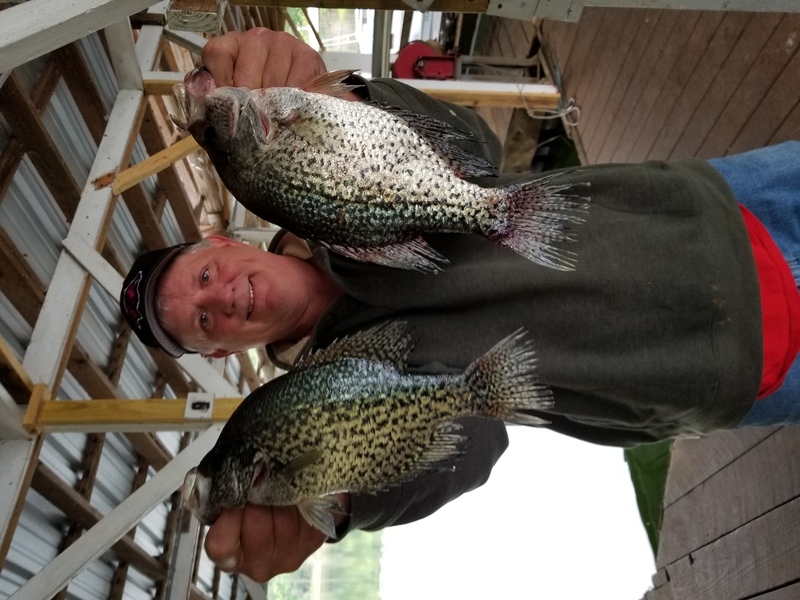 The lake level is 567.94 and continues to rise about 2-inches a day despite no rain and very little generation.  Beaver is one foot away from going over the spillway, they are dumping water from there into Table Rock and filling Bull Shoals from there to try and keep Table Rock at a normal level. Bull Shoals is very high but can hold a lot of water. It is a good thing it has not rained in a few days but more is scheduled for next week. It would be very nice to see the level at least stabilize. The water is actually very clear both in the creeks and main lake. We are still not above average rainfall for May. The average for May is 4.82 and drops to 3.6 for both June and July. Novenber is our wettest month. The weather has been beautiful with highs in the low 80's and lows in the low 60's and sunny. The lake surface water temperature is in the low 70's and more people are starting to swim in both the lake and Blackburns big pool. The beaches are all under water so swimming will have to be mostly in pools or off boats this summer. There is still some debris floating from the shore as the lake rises and you have to watch and stay off the lake in the dark. Most everyone continues to catch fish. The top-water bite is about as good as it will get with fish coming up most days. Bass, crappie, walleye, catfish, bluegill and small stripers continue to be the best bite with a few White Bass and Hybrid Stripers also being caught. Bink did catch a big striper yesterday and said it was the first one in the 20-lb. range he had caught in a while. Usually he catches them almost at will. He is really catching the 4-lb. smallmouth. A few stripers have gone deep already. I do not know what the dissolved oxygen level is at this time. The Striper Club usually keeps track of that. Creek minnows are all over the place and game fish are with them on the old shoreline in front of the buckbrush. The bass population in Norfork Lake is very good. Big ones too. Both fish cleaning stations were busy here at Blackburns on Saturday.