Scuba Steve likes those big crappie. All fish were released. 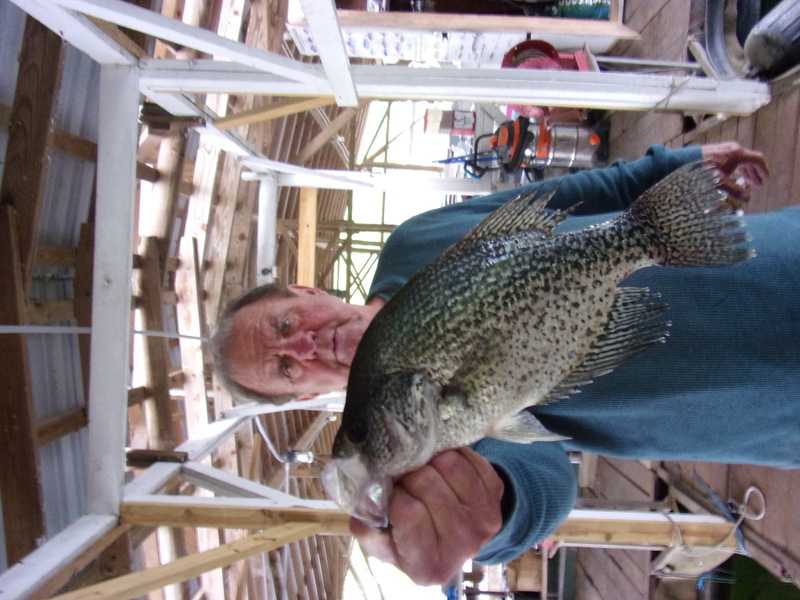 The lake level is 567.14 and has dropped about 1/2 inch in the last 24-hours but is about the same as last evening when they took a few hours off generating. It drops very slowly when they generate and rises very slowly when they quit. We did receive a little rain yesterday afternoon but not much but more is on the schedule. They are all over the place predicting how much but it looks like we are going to get some and maybe quite a bit. It is still sunny and warm out now but that should end tonight. At least we have had several days to dry out and the water is gone from the creeks and hillsides. The warm nights should make the early top-water bite better as the surface water temperature increases. There were several big fish coming up in Blackburns Creek last evening in the light rain and they were mostly bass. There are usually small fry under the dock by the brush and light by now but I have not seen any yet. I am just not seeing nearly as many shad as usual and the winter kill may have been worse than I thought. Bink said the kill continues for a few weeks after the water warms back up and I suspect he is right. He almost always is. More sink than float. The relatively stable water level for the last several days has not hurt the spawn any for the end but the rapidly rising water in April did not help anything. Some big fish, both crappie and bass, have not spawned out yet but a lot have. I am finding large schools of crappie in the 7-8 inch range and also throw back black bass of all species. That makes for good fishing in the future.  What we do not need is a big rain in the Norfork River water shed in Missouri. Top-water lures, jigs, grubs, spinner baits, crank baits and creature baits are all working for a mixed bag of fish right now. Kentucky bass are the best bite and are very good eating. They only have to be 12-inches to be legal. Big bluegill are just starting to bite and are also ready to spawn. I am not seeing any spawning shad at this time but I only go from about past Robinson Point south to point 8 or just past north. No need to go any further. I do like Briar creek and East Pigeon in the spring. Live bait trollers are getting stripers but they are not very big. At least what we have been accustomed to in the past. White Bass numbers are way down but hybrids are about normal in numbers and size and  they are the best fighters pound for pound of any other fresh water fish. I wish more were stocked. I went out for a few minutes between jobs on one spot and caught some nice fish. The surface water temoperature was just under 70 in the creek.