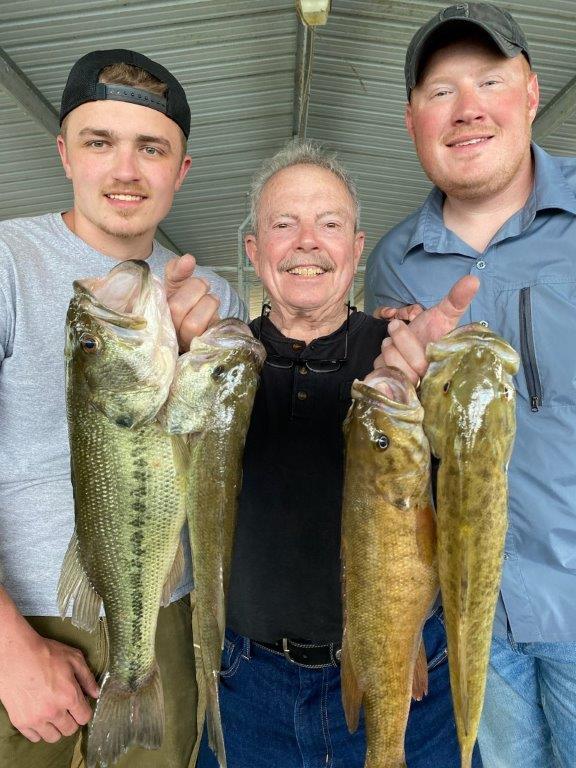 The lake level is 566.55 and has risen 10-inches in the last 24-hours but they starting generating earlier this morning. The lake overall is in pretty good condition but rising steadily. Small stripers, bass, bluegill, crappie and walleye were all caught yesterday by several good fishermen. It is very cool and dreary with a northeast wind and you need a coat out on the water. The nightime lows are in the 40's. This is not what you would expect for the 10th of May but global warming has not hit here yet. Normal high is 76 degrees. There is not much to say about the spawn except that some have and some haven't and the surface water temperature has dropped to about 67 in the Blackburns Creek area and the fish are confused and do not like making nests and have them too deep the next day. They will only try this a couple of times and then give up and then release unfertilized eggs in open water. You can catch fish about everywhere except in open deep water. Several are on the bank in back of the buckbrush on worms and other creature baits and some are on brush in the creeks in 23-ft. of water on jigs and minnows. Some small stripers are on the steep bank west of the sunken Cranfield Island. Over 1/2 of the crappie being caught are throw backs as are the bass but some nice ones are also being caught. Norfork is known for big fish but not high numbers but that is not the case now. I am not seeing very many shad and the ones that I do see are very small except for some large gizzard shad under docks. Some were in the back of Hensley's yesterday but the wind has shifted to the northeast for a couple of days now.